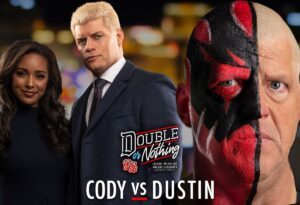 All Elite Wrestling has been making headlines over the past few months without even running an official show yet. Their initial “All In” show was before the company had officially formed, but their “Double or Nothing” sequel just got even more interesting as it’s been announced that Executive VP Cody will face his own brother, Dustin Rhodes at the event.

The move is quite a shock being Dustin Rhodes was considered to still be part of WWE as “Goldust,” even as recent as the past few weeks where he took to Twitter to verify he was still with the company. Earlier today, AEW released an outstanding video that announced the match and built a story in about 6 minutes that was more intriguing than most things we’ve seen in wrestling in quite some time. The duo obviously have history as you may remember they teamed as Goldust and Stardust just a few years ago on WWE TV.

The built-in “older brother vs. younger brother” story not only feels natural, but the story as told by Dustin himself is compelling and shows just how much Goldust was underutilized in WWE. Take a look at the video below and see if you get the vibe that AEW Double or Nothing on May 25th feels like an even bigger event now that we will see the sons of Dusty Rhodes do battle: