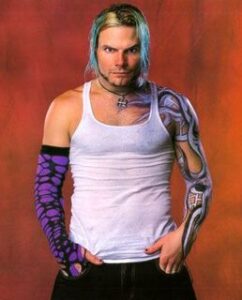 Originally this post was set to be a look at last nights RAW WrestleMania Rewind show, and I was going to highlight the main 2 things that did anything for me, one being the mega heat that Floyd Mayweather drew (sadly the best heel by far in WWE,) not to mention the near shoot fight that took place between WWE and Mayweathers crew, wow, realism really makes wrestling interesting, too bad no one in WWE can pick up on that and make that whole show like that! And the other thing I was going to feature, was the awesome Hardy vs. Jericho 2 match.

As I sat and watched Y2J pull some heelish antics that remind me of his original run, and then Hardy with the fans going wild for him as usual, while the male audience roaring for Jericho…the atmosphere was electric, and I was wondering once again, “Wow, why are these guys not main eventing Wrestlemania 24?” Hardy the super face, Y2J the cool heel, and not to mention these guys produce 5-star wrestling matches on top of that! When Jericho took the win once again, I was surprised. I loved the fans going nuts for all the near falls, then BOOM Jericho wins.

Weird, a title change this close to Mania, and Jericho beating Jeff twice in a row. Then it hit me, wow, WWE is doing it…..perfect. Y2J just won the Intercontinental Title, so Hardy can win the MITB, which will mean Hardy will take his shot not long after, and finally take the belt. THEN, Jericho is the IC Champ who has beaten the WWE Champion twice, which is Jericho’s ticket to challenge Hardy, and there it is, a great WWE Title feud finally, with a story behind it, and 2 guys who produce matches we want to see……….sadly, I was wrong.

In reality, Jeff Hardy dropped the title to Y2J because he has yet again been suspended, this time for 60 days, due to a wellness violation……damn. It seems that every time Hardy is on the brink of something huge when his fans will not take no for an answer……something like this happens. He was released from WWE once before (After refusing to got to rehab,) and popped up in TNA for a short run (He was also briefly suspended there for no-showing an event,) where he was once again over big time with the fans, and put on some great matches, but seemed to lack something, maybe it was not being in front of the WWE crowds.

When he returned to WWE, he seemed to be back at that level, the fans were behind him, and have stayed behind him since his return. He has been suspended once under the new policy, and now this is his second offense, which means one more, and he’ll be released from WWE once again. In my opinion, it’s all over, Hardy will now never get the big push because he cant keep his shit together. As I stated in my previous post, I haven’t been the biggest Hardy follower over the years, but I’m all for a new talent who gets overdue to the fans demanding it and seeing a new main eventer get there because the fans want it, not because it’s shoved down our throats. But now, IF Hardy returns, I feel WWE will never trust him to run with the big title, given his history.

Sad to say it, but I guess we’re stuck with our current main event picture because Hardy was the only guy that I saw stepping up a level, but now I see Hardy going nowhere in WWE, and if he does, we’re looking at it being a GOOD while from now.