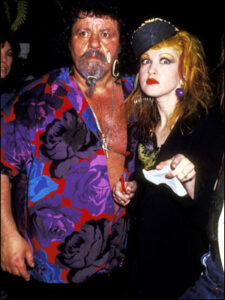 Captain Lou Albano passed away today at age 76. Lou was one of the most recognized faces during WWE’s “Rock and Wrestling” era, is a WWE Hall of Famer, and is recognized as one of the top managers in wrestling history.

In 1985, when WWE was taking over the wrestling world, Lou played a huge role in making wrestling mainstream after appearing in numerous Cindy Lauper videos and being involved with Lauper when she appeared on WWE programming.

Prior to this time, Lou managed numerous tag teams to gold, from the Wild Samoans, the Valiants, and Fuji and Saito, to the Moondogs and the British Bulldogs. After Lou’s role leading up to the first WrestleMania, for the first time, Captain Lou became a good guy and played that role until his exit from WWE in late 1986.

After WWE Lou’s star kept on growing, starring in the movie “Body Slam” in 1987 with Roddy Piper, then being cast as “Mario” in the Super Mario Brothers show. Lou will always be remembered as one of the most unique and charismatic characters in wrestling history.

The rubber bands, the bright clothes, the 90 mph talk, we had no choice but to be hooked by Captain Lou. You won’t find intriguing characters like the Captain in today’s wrestling. Below are some videos, including talking about his role as Mario and more from the one and only, never forgotten, true Hall of Famer, Captain Lou Albano.