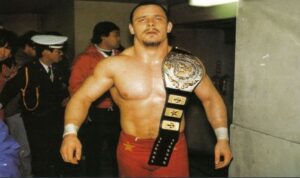 Pro Wrestling has lost one of its most innovative and maybe underappreciated stars ever in The Dynamite Kid Tom Billington who has passed away today – his 60th birthday.

Most fans will remember Dynamite Kid as one half of the British Bulldogs tag team with Davey Boy Smith who were quite possibly the top tag team during the heyday of Hulkamania. The Bulldogs won the WWE Tag Team Championship at WrestleMania 2 over The Dream Team (Greg Valentine and Brutus Beefcake) and also had a legendary feud with The Hart Foundation that spanned almost their entire time in WWE.

What some may not know is that Dynamite Kid was an International star before ever setting foot in a WWE ring. From his time in Canada with the Hart family to becoming a certifiable legend in Japan, Tom Billington laid a lot of groundwork that wouldn’t fully be appreciated until many years later. Dynamite Kid’s matches with Tiger Mask from Japan still hold up today and were like nothing else you could see in the early 80s.

In WWE it was common to see almost every wrestler in bodybuilder-like shape, but watching Dynamite Kid’s earlier matches really show how bad he was abusing steroids at the time. Sadly his steroid use combined with his in-ring style lead to a very early retirement for the Kid in the early 90s. Kid returned to England and was wheelchair-bound for the past few years of his life.

With Triple H bringing so many past stars that haven’t been affiliated with WWE in many years, it would have been nice to see him be able to bring in the Dynamite Kid for a Hall of Fame induction. An induction should still happen either by himself or with Davey Boy for the British Bulldogs team.

Below is WWE’s look at one of the famous Dynamite Kid vs. Tiger Mask matches; WWE will hopefully put together a Network Collection so newer fans can truly appreciate Dynamite’s matches and innovative style.