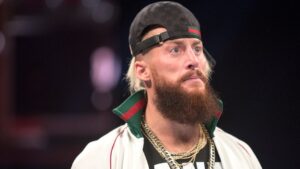 It’s been quite a 24 hour period for the ever-controversial Enzo Amore (real name Eric Arndt) and now he finds himself no longer a WWE superstar.  As reported by TMZ yesterday, allegations of rape were made public yesterday and WWE was quick to suspend Enzo until the situation was figured out – standard procedure when such allegations come to light, but it obviously took less than 24 hours for the company to get the information they needed as Amore has been officially released.

The (now former) WWE Cruiserweight Champion has been reported to be in the WWE doghouse for months especially with the other superstars, mainly due to his attitude and mouth.  Reports months ago stated that he wasn’t even allowed to dress with the other superstars after being kicked off a tour bus by locker room leader Roman Reigns.  Even though his ego may not have been winning him over backstage, Enzo was still receiving a push as he had become the main star for WWE’s “205 Live.” Obviously when accusations of rape surface, things are bound to be handled on a much different level.

A couple of years ago when Enzo Amore debuted with Big Cass after their successful run in NXT, the duo was immediately over with the fans, and the reactions they received proved that.  Along the way, it was obvious that Big Cass was destined to be a singles star due to his size, but Enzo brought the flash to the team and was able to turn himself into a singles star after Big Cass turned on him and then went out with an injury.  After these multiple instances of problems backstage and now a much bigger problem legally, it’s likely the last time we will see Enzo in a WWE ring.

So where does Enzo Amore go from here? While some may guess another wrestling promotion, it’s likely that he may try to enter into other forms of entertainment like music or acting since his reputation may follow him and not open too many doors in the pro wrestling world.