With WrestleMania 33 over, obviously there were a lot of big stories in pro wrestling over the past 24 hours. Read on for our picks for the top wrestling news for today:

Backstage News On The Hardys Returning At WrestleMania 33, Jeff Hardy’s Health Going Into The Match

The Hardys sure made quite the return last night! Did you know that the new RAW Tag Team Champs did not show up for WrestleMania 33 until really late in the show? There were some rumors leading up to their appearance but no solid leaks until it actually happened. Read this article for more behind the scenes news from their appearance, as well as rumors and speculation about Jeff Hardy’s health after Saturday’s Ring of Honor match. 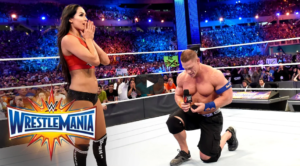 Via TMZ – John Cena proposed to Nikki Bella and used her real name in the ring. Of course they took care of business first, beating up on The Miz and Maryse. TMZ has video of the proposal:
http://www.tmz.com/2017/04/03/john-cena-proposes-nikki-bella-engaged/

The Undertaker Seemingly Retires, Gear Remains In The Ring Well After WrestleMania Is Over

Did The Undertaker really retire? It seems like he left it all in the ring – literally. After the match Taker placed his hat, coat, and ring gloves in the middle of the ring. WWE video and twitter pics.
What did you think of WrestleMania 33? A lot of rumors came true. So perhaps there wasn’t as much suspense. However, a lot of major events definitely happened and a couple big surprises, too!
We’d definitely like to hear your thoughts in the comments on this blog or any of the Pro Wrestling Roundup social media pages.
0Shares
Tags: Jeff Hardy, John Cena, Matt Hardy, Nikki Bella, The Hardy Boyz, The Undertaker, WrestleMania 33, WWE