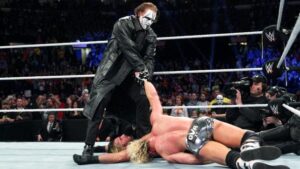 Every so often I find myself underwhelmed with upcoming WWE pay per views; the matches just don’t have much behind them, nothing new seems to be happening, then BOOM WWE hits us with a show that is just flat out great and suddenly I’m hooked all over again.  The last time I remember a WWE show being that good was WrestleMania 30, and there hadn’t been many others in the months before that.  Survivor Series 2014 was without a doubt one of those shows.

Of course, the big story going in with the Team Cena vs. Team Authority match which would see either all of Team Cena get fired (yeah right) or Triple H and Stephanie would lose power – with Brock Lesnar not competing on the show, they really built an alternate story that delivered in more ways than I would have ever imagined…on to the results:

The whole point of this was just to reintroduce the “new and improved” Fandango which consisted of new entrance music, attire, and Rosa as his vale.  Fandango gets the quick win.

Not sure what the point of this one was – Swagger was originally on Team Cena but was taken out…I thought.  Apparently, he’s just fine, and uh, no real reason as to why he was in a pre-show match instead.  Swagger gets the win here as he and Cesaro continue to coast in WWE.

Seems like some combination of these teams is wrestling each other on TV week in and week out including pay per views, but the way the fans are going crazy over “Mizdow” makes any match he’s in entertaining.  Good match none the less and the crowd ERUPTS for Mizdow scoring the win for the titles.

For the first time in a VERY long time, the Divas were actually given time to work with and had a really good hard-hitting match.  Paige was the standout as usual as she worked well with all of her opponents; Paige and Natalya had some particularly hard-hitting action toward the end.  The team of Naomi, Natalya, Fox, and Emma actually shut out the other team 4-0 as Paige was the last to fall.

I know this match seemed intriguing after the end of last month’s Hell in a Cell PPV which saw Wyatt cause Ambrose to lose to Rollins in the main event, but to me the story has been lackluster since; both guys are intriguing talents and do great things, but I haven’t really seen the point as to why they are feuding.  While the feud has been underwhelming to me, I can’t say the same about this match – it really was great and both “mad man” personas worked really well.  At one point Wyatt grabbed the mic and began his oddball speak to Ambrose, then brought in a chair which Ambrose took away – a move that saw Wyatt challenge Ambrose to hit him, which Ambrose gladly obliged for the DQ.

The action didn’t stop there as Ambrose proceeded to put Wyatt through a table and literally bury him in tables and chairs.  The giant ladder came out next (we started seeing the pattern here) before officials broke it up.  Ambrose came off really strong here as he matched Bray’s craziness – the TLC match between the two at next month’s TLC PPV has already been announced.

I can’t believe I just typed that result – anyway, WWE must have needed to fill some time and/or calm things down a bit since all the action had been great prior to this.  The Bunny (whoever it is) got the win and left with Rose’s “Rosebuds.”  Guessing Rose will feud against whoever the bunny is revealed to be…. a bit of a corny story for today’s wrestling scene.

Here was a major curveball – this match lasted a few seconds as Brie Bella hopped up on the apron and stood there awkwardly….her next move was to grab AJ and kiss her right on the lips…….yes, “HLA” made a brief appearance at the Survivor Series – makes us wonder if a bit of “Attitude” may be coming back if WWE realizes there is a big section of their fans (called me…..OK and some girls too) that love this sort of thing! 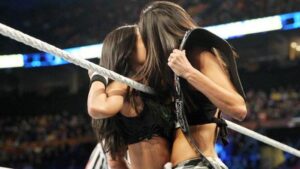 AJ turned around in shock after this to get knocked out by Nikki and given the “Rack Attack” (great name) and score the win for the title.  To further the twist even more, instead of Brie acting like she was forced to kiss AJ by Nikki (that might’ve been even kinkier,) Brie acted happy as if the Bellas had some sort of master plan….should be interesting to see where this goes as Brie’s time as Nikki’s assistant is about up.

Plenty of action leading up to this one, but this was the match that had it all on the line.  The match started out hot as Big Show eliminated Mark Henry in the very first move of the match with the knockout punch.  We were 5-4 from the get-go, which made for some nice emotion outside the ring from Triple H and Stephanie.  Ryback is eliminated next as Rollins sneaks in a curb stomp in the midst of both teams brawling, don’t get why Ryback is continuously cheered but was so low on the totem pole in this match.

Next up Rusev is on the attack and plans to take out Dolph Ziggler by putting him through the announce table – that didn’t quite work as Rusev missed and fell hard through the table – Dolph made it back in the ring just as Rusev was counted out.  Harper eliminates Rowan next to even things up.  As Show and Cena face off with the other team while Ziggler is down on the outside, Show turns on Cena and causes Cena to be pinned; Show walks over and shakes hands with Triple H to solidify yet another turn…I guess.  So I guess we’re supposed to believe that Show had an awakening in the middle of the match and wanted to be cool with The Authority; after all, he did take out one of their members just minutes earlier to start the match. Show exits which leaves Ziggler on his own.

Big shocker here to see the match in Ziggler’s hands as I would’ve guessed Cena would’ve been there in the end no matter what.  Ziggler is the major underdog but pulls off a pin on Kane, and then on Harper which left Ziggler and Rollins one on one for all the marbles.  Great back and forth between the 2 with many near falls.  Ziggler almost has the win before Triple H interferes and starts pulling out and attacking referees.  Finally, H gets in the ring and lays out Ziggler himself and puts Rollins on top of him for the win………then things really got serious.

Ominous music hit and images appeared on the video screen, Triple H looked on in shock, as STING made his first-ever appearance on WWE programming to a thunderous reaction.  Sting slowly made his way to the ring and had a staredown with Triple H that had the fans completely losing it.  Finally, Triple H took a shot at Sting which Sting countered and ultimately his the Scorpion Death Drop to lay H out.  Sting proceeded to put Ziggler on top of Rollins for Ziggler to get the pin and the win for Team Cena!  The show closes with Stephanie McMahon completely losing it in the ring as the fans roared with happiness over the fact that The Authority is now out of power in WWE (as of now at least, it is WWE after all.)

I read the rumor that Sting may debut at Survivor Series, but seeing it actually happen was a surreal event that will go down in WWE history.  Sting has never in his career appeared at a WWE event and is undoubtedly the biggest star of the past 30 years not to do so.  Does it mean he will be on RAW as a regular persona?  Maybe/maybe not.  Does he mean he will wrestle at WrestleMania 31?  We’re thinking definitely.

Vince McMahon kicked off the Survivor Series by announcing his guarantee that it would be memorable and also announced that if The Authority lost, they would still have their desk jobs (nice touch of realism and covering bases there) and that they could never be back in power unless John Cena says they can.  It felt like change was in order and tonight was the kickoff.  Something like this has been sorely needed in WWE, and hopefully, they will continue this momentum going into RAW.  WWE proves once again that they are still capable of putting on awesome shows AND awesome stories, they just need to listen to what the fans want….and if they do they can continue to blow roofs off of arenas.

Don’t forget, you can still watch Sting’s WWE debut free for the rest of this month on the WWE Network!