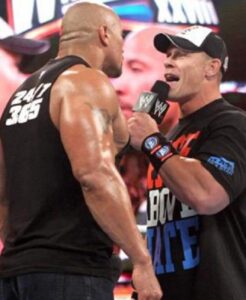 Last Monday sparked a lot of talk in the ongoing John Cena vs. The Rock feud.  1 year ago, history was made as John Cena vs. The Rock was announced as WrestleMania 28 main event a year in advance.  At WrestleMania 27 last year, The Rock vs. Cena was the spotlight of that show even though the actual match was Cena vs. The Miz.  This year all the focus is on the actual match between the 2, and up until this past Monday, it has been apparent that The Rock will without a doubt be the overwhelming crowd favorite in his hometown on the grandest stage of them all.

On Monday, the Rock made his first live appearance on RAW to begin the hype for his WrestleMania 28 match with Cena.  The Rock had many comebacks and cutdowns for Cena, had the crowd going wild, and brought the electricity in general that The Rock always brings.  Of course, all of this brought Cena out to the ring to confront The Rock, but the verbal warfare that Cena unleashed this time had the line of reality blurred for many people and seemingly even left The Rock a bit speechless.

Cena hit the Rock with his usual “You’re never here” and “You’re egotistical” type stuff, but it was Cena calling out The Rock for having notes on his promo written on his wrist that really raised some eyebrows.  The Rock genuinely seemed pissed off about being called out on this, and it seemed like he had no clue the line was coming.  I personally don’t think it’s a big deal to have a few points written down that he wanted to hit in his promo, but Cena was able to spin it and use it to show that The Rock is just an insincere asshole.

The word going around this week is that WWE is dead set on getting the fans to be split 50/50 in the Rock/Cena match.  Personally, while Cena may have gotten the better of Rock in Monday’s promo, the fans STILL cheered The Rock, and The Rock’s promo was dead on in saying that fans are completely sick of seeing Cena every single solitary week.  The Rock comes around enough to keep his iconic status, and there is no way in hell that anywhere even close to half the fans will cheer for Cena in Miami in my opinion.

It will be interesting to see how WWE handles the feud as the Road to WrestleMania pushes on.  The Rock will be at RAW live again this Monday, and this situation will no doubt continue.  I don’t see any big number of fans jumping ship to Cena’s side, but WWE may keep trying.  I expect this match to be like Rock vs. Hogan at WrestleMania 18, with The Rock being in the Hogan role this time.  The ONLY way Cena could win this in my eyes is finally going through the full-fledged heel turn.  Other than that, the goofy, smiling, forced down our throat Cena winning will be an all-out disaster…..but somehow I don’t see The Rock allowing that to happen.