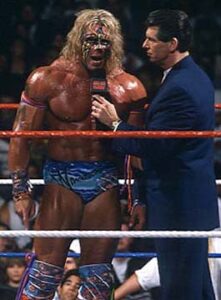 Finally, after much speculation about The Ultimate Warrior being the headlining inductee into the WWE Hal of Fame this year, only to find out he backed out, we now get to hear from the Warrior himself on what went down between him and Vince McMahon, and why he won’t be inducted this year. The Warrior broke his silence on his website, posting a lengthy blog explaining everything that went down. Contrary to what many felt had to be a money issue, Warrior claims money was never even discussed. It seems that Warrior wanted to meet face to face with Vince to discuss some things, mainly the way WWE portrayed him in “The Self Destruction of The Ultimate Warrior” DVD. Here are some excerpts from the Warrior’s blog:

“I did decline induction. Yes, I declined.

I did not “back out” of anything. There was never anything to “back out” of. I never agreed to appear at the Hall of Fame to begin with. The rumor that I did is a lie; an easy one that fits the kooky, fictional groundwork the liars have been laying down for years. It sounded good, made me look bad, so they added it on.

The issue of money never came up, either. I’m not even sure they pay inductees. I don’t think they do. I could be wrong. Don’t know. Don’t care. I never considered asking for any and it was never brought up in any of the discussions I had. Discussions, mind you, I had only with Vince, nobody else.

Vince called me on December 23rd and left a voicemail saying, among other things, “let’s get you in the Hall of Fame where you belong.” After the holidays I returned his call, left a voicemail telling him to call me again when he found time. When we finally connected, I told him I would rather meet with him in person than talk over the phone. He said that would be great. He said he would find time on his calendar and call me back to set it up. When he called back a couple of weeks later he didn’t even mention finding a time scheduled to meet, and throughout the remainder of the conversation, further decided not to find one. So, given only the option to say either yes or no, my answer was quick and clear, I declined Vince’s invitation to headline this year’s HOF event.”

This is only a small portion of the Warrior’s post, but he goes into much more detail. Looks like Vince may have been the one that didn’t make it happen, and hence we have probably the weakest Hall of Fame induction night ever. You can read the Warrior’s full post at UltimateWarrior.com.