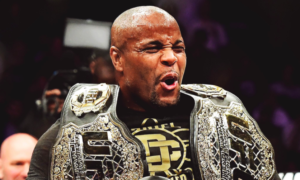 WWE is adding a little something extra to an already loaded Extreme Rules premium live event next Saturday with the addition of UFC Hall of Famer Daniel Cormier as the special referee for the Seth Rollins vs. Matt Riddle “Fight Pit” Match. The news broke earlier tonight via Ariel Helwani:

Daniel Cormier will serve as guest referee for next Saturday’s Fight Pit Match between Matt Riddle and Seth Rollins at WWE’s Extreme Rules in Philly. Oct. 8.

Cormier is no stranger to the pro wrestling world as he has openly been a huge fan for years and has been seen in the crowd at events and even WrestleManias before. Cormier also had a light-hearted (or was it?) confrontation with Brock Lesnar a few years ago in the Octagon after one of his fights. Cormier actually taking part in a match may be the open door he’s been looking for to get more involved in wrestling.

Fans online seemed to have been pushing for UFC and WWE legend Ken Shamrock to get the special referee job for the Fight Pit match, likely since Shamrock participated in the “Lion’s Den” matches back in his day and was a huge factor in bringing over a lot of MMA elements to WWE.

It looks like Triple H and co. have opted for a more recent legend and one that could get involved further in the pro wrestling ring if he chose to. It will be interesting to see if Cormier sides with his fellow former UFC star in Matt Riddle, and if so, see if it leads to something further with Rollins.

WWE Extreme Rules takes place next Saturday night October 8 and airs live on Peacock. The show is in Philadelphia and is bringing back a special vibe since every match has some form of stipulation involved.