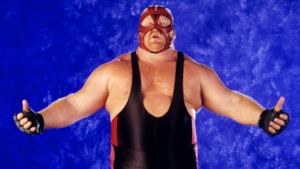 The wrestling world has lost another great as Leon White (aka Vader) has passed away at the age of 63 after a battle with congestive heart failure.

Leon White debuted in pro wrestling as “Baby Bull” in the AWA during the late 80s following his run in the NFL as a member of the Los Angeles Rams. While White traveled the world during his first few years in wrestling, he found true success when he became “Big Van Vader” in New Japan Pro Wrestling.  Vader debuted on top, feuding with Antonio Inoki which began building his legacy almost immediately.

I first remember seeing Big Van Vader debut in WCW in 1990 after much buildup with videos highlighting his matches in Japan. The crazy smoking mask, his size and power, Vader was almost surely going to be something special.  While Vader was indeed an attraction during his first WCW run, it wasn’t until 1992 that it was clear he would be a main event star in the company.  Seeing Vader defeat Sting at the Great American Bash 92 for the WCW Championship was quite a shock being it felt like Vader’s first big main event.  Vader went on to dominate WCW for the next 3 years with multiple championship runs and memorable matches with Ric Flair, Hulk Hogan, and many more matches with Sting.

In 1995 Vader made the jump to WWE and it felt like a huge move at the time since WWE was in need of star power.  Vader made a major impact upon his debut and had a memorable moment when he attacked WWE President Gorilla Monsoon.  Vader was built as a major threat to Shawn Michaels WWE Championship but was ultimately defeated at SummerSlam 96.  For the next two years, Vader remained a force in WWE but didn’t quite reach the world championship level he did in WCW.

Outside of wrestling, many will always connect Vader with appearing on the “Boy Meets World” series where he played himself in numerous memorable episodes.  Vader’s legacy will undoubtedly be one of the (if not THE) best big men ever.  In Japan, he was one of the American wrestlers that was viewed as one of the top stars ever.

Sadly, Vader himself spread the word two years ago via his Twitter that doctors told him he only had two years to live.  Mick Foley had made an effort to get him inducted into the WWE Hall of Fame before it was too late; sadly it didn’t come to fruition.  Vader recently had heart surgery and was fighting to beat the odds, but ultimately a bout with pneumonia was too much for him to overcome.

R.I.P. Vader – one of the most innovative International stars of all time!