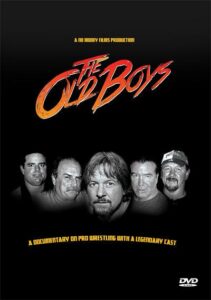 It’s been quite a while since we’ve seen a feature-length wrestling documentary that delivers some really unique content that hasn’t been seen and told before, but the new documentary ‘The Old Boys” delivers just that.  We’ve all seen shoot interviews, convention Q and A’s, and of course archive footage from the classic days of wrestling, but this documentary is unique in that it delivers a little bit of all these things.

The Old Boys provides an ongoing discussion about the wrestling business with legends like Roddy Piper, Demolition, Terry Funk, Scott Hall, The Dynamite Kid, and Jake Roberts, guys we’ve heard from less over the years like Paul Roma and Jim Powers who were once “The Young Stallions” in WWE, more recent stars like Road Dogg and Hardcore Holly as we get to see them interact with the newer crop of talent on the independent scene, and of course ever-controversial figures like The Iron Sheik and The Honky Tonk Man who never hold back when it comes to having something interesting to say.

The documentary was filmed over a span of a few years, so we get to hear from Jake “The Snake” Roberts and Scott Hall prior to them getting help from DDP and getting their lives together recently, so the movie is a real eye-opener when it comes to seeing how far these two have come.

We always love hearing from wrestling names of the past, but this documentary also provides some truly unique content that we haven’t seen anywhere else before; we’ve all heard the legendary stories of Owen Hart pulling prank calls on people, but here we actually get to listen in on one of Owen’s “ribs” as he acts like a pushy pizza delivery guy…pure hilarity.  Also, we get to see footage from the wedding of “The British Bulldog” Davey Boy Smith and Diana Hart-Smith which gives us a rare glimpse behind the scenes of Davey Boy with his partner the Dynamite Kid and Jim “The Anvil” Neidhart as well.

We mentioned wrestling autograph conventions earlier, and we have to point out that this film actually delves into what might be the most talked-about topic of wrestling conventions…..Virgil.  Yes, there is actually a segment that highlights (or lowlights) Virgil’s status at conventions….and he has no problem showing how he hustles people for money at these conventions…even if they don’t really know who he is.

The Old Boys addresses some specific topics with specific wrestlers like Roddy Piper and how he feels about Hulk Hogan getting the majority of the WrestleMania 1 credit and Road Warrior Animal on if he feels Demolition was a Road Warrior ripoff.  Of course, almost all the wrestlers give their feelings on their time in WWE and how they feel about the company now.

The Old Boys is great for fans that grew up in the 80s and 90s and enjoy hearing from the stars of the past.  It gives a great amount of variety and was an enjoyable watch.  You can buy the DVD or stream online at The Old Boys Facebook page. The trailer for the film can be seen below: