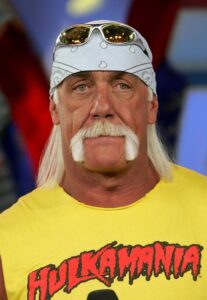 Controversy has seemed to be follow Hulk Hogan more than ever in the latter years of his career and now another situation looks to be striking the Hulkster down again just when he was gaining some ground. It’s been around three years since the Hogan sex tape controversy became an Internet spectacle, but this situation will probably be much worse since it portrays Hulk as a racist instead of a victim.

Last night rumors began to swirl that there was some sort of issue that caused WWE to remove all Hulk Hogan mentions and merchandise from their site and that it was due to some alleged recordings that featured Hulk on a racially-charged tirade.  Now this morning both RadarOnline.com and NationalEnquirer.com are reporting that they’ve heard the tape, and it features Hulk having a conversation a few years ago with Heather Clem (the same female involved in the sex tape controversy) where the “N” word is used excessively as Hulk describes his daughter Brooke’s relationship with a black man.

Of course, if this turns out to be true, WWE steers clear of any controversy of this nature and is already distancing themselves from Hulk in preparation for the storm of negative press that has already begun.  Yes, this did occur three years ago in 2012, but just like Dog the Bounty Hunter and Mel Gibson found out, any racially charged statements are going to be plastered all over the media, and living them down won’t be an easy task.

Of course, the timing is horrible for Hogan as he has been enjoying a year and a half return run in WWE and is currently a judge on Tough Enough which airs every Tuesday night on USA; this controversy will shake this show up as WWE will have to insert another judge midway through the competition.  Hulk has also made rumblings about having one more match (possibly a retirement match) at WrestleMania 32 in Dallas next year – an event that will almost surely break the WrestleMania attendance record set by Hogan and Andre the Giant at WrestleMania 3 in 1987.

So what happens next?  We’re currently awaiting an official statement from WWE which will undoubtedly be made sometime this morning, and then we just sit back and see how all this unfolds.  Most likely Hulk will be making the rounds on any media outlets that will have him, making apologies and asking forgiveness which he will probably get over time.  WWE most likely hates to lose Hogan right now as he was going to play a huge role in promoting WrestleMania this year, so they’re likely in hopes this will all blow over by then.  We will provide more updates as this situation continues to develop.