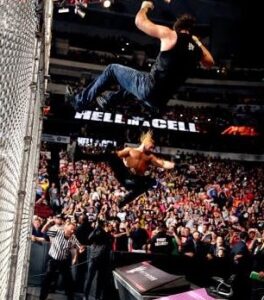 WWE’s Hell in a Cell pay per view had a bit of a different vibe this year since there was no WWE World Heavyweight Championship match on the show; built around Dean Ambrose and John Cena’s quest to gain revenge on “Authority” member Seth Rollins, the show ended up featuring two Hell in a Cell matches: Ambrose vs. Rollins and Cena vs. Orton in another of their seemingly endless number of matches.  On to the results:

Throwaway match just to get the crowd warmed up I guess.  Bo Dallas does his comedy, Mark Henry annihilates him, pretty much the end of the story here.

Good back and forth match as was expected with these 2; Ziggler wins in 2 straight falls which any real wrestling fan knows we hardly EVER see.  Seemed like WWE just wanted to go against the grain here and do two straight falls even though these 2 guys probably could have had a 30-minute classic.

Really good match between the twin sisters, seems apparent that Daniel Bryan and/or John Cena continue to assist these two as both have improved greatly over the years but even more so recently.  These two held nothing back with plenty of stiff shots and high-impact moves.  Nice to see an old-school stipulation added to this one which extends this feud and gives it a good way to progress over the next month with Brie as Nikki’s assistant.   Later in the night Nikki already had Brie hard at work – having Brie make a smoothie but then dumped it on her head…..this should really fuel this feud nicely.

Decent match between these teams as usual, just feels like we’ve seen it numerous times which can be said for most of the tag team matches lately in WWE.

This Hell in a Cell match came to be due to Cena losing the match against Ambrose to determine who got to face Rollins in the cell; they were careful here not to say the “loser” faced Orton as they wanted this match to be meaningful as well.  This was pretty much a typical Orton vs. Cena match, albeit with a bit more of a hardcore or no DQ match vibe; that’s not to say it was BAD, as most Orton vs. Cena matches are quite good being they’ve wrestled each other SO many times, it’s just that we’ve seen the match a lot (even inside the Cell before.)

Cena wins with an Attitude Adjustment through a table and apparently will get yet ANOTHER shot at Lesnar (yawn.)  They didn’t really use the cell itself much, maybe since the main event used it so much.  Notable here that the crowd was mainly behind Orton, and he seems to be getting momentum as a good guy again, especially after the series of viral RKO videos that have hit the Internet; pretty sure Orton will be on the good guy side again soon, but hopefully not as a smiling, hand slapping, fan loving good guy.

Without a doubt the highlight of this match was Damien “Mizdow” Sandow – the guy has gained the fans’ support for his antics outside the ring as Miz’s “stunt double.”  Sheamus and Miz have remained pretty bland over the past few years, but Mizdow gives the fans something to cheer and look forward to in the Miz’s matches.  Sheamus helped demonstrate this after the match, as he picked up a lifeless Miz and made him dance and such just to see Sandow mimic the movements.  Hopefully, they’re careful not to turn Mizdow into a total comedy act ala Santino…which would mean just getting lost in the shuffle.

Another good big man match between these 2 – the fans are really behind the idea of anyone opposing Rusev and standing up for the USA.  Mark Henry walks out toward the end, which had us fearing an obvious-looking heel turn on Show, but luckily that turned out to not be the case.  In fact, Rusev looked even stronger as he knocked Henry off the apron, then finished off Big Show cleanly with the “Accolade.”  Rusev is on a red-hot run and it seems no one will be stopping him anytime soon – should be interesting to see what happens when he encounters the likes of Cena.

Another great match in the series between these two.  Paige was accompanied by her new “bestie” Alicia Fox.  The crowd was rather dead after all they’d seen up to this point, which is a shame because these two don’t have the typical “filler” Divas match and really go all out.  Paige ends up taking a fall off the guardrail on the outside and Fox helps her back in which ultimately led to AJ locking in her “Black Widow” for the win.  Paige blames the loss on Fox and slaps the hell out of her before leaving…guess another friend bites the dust for Paige, should be interesting to see where the Divas Title picture goes from here.

Match of the night here and great to see two new main eventers getting the spotlight as it very easily could have been Cena and Orton main eventing.  Ambrose comes out and immediately heads to the cell roof and challenges Rollins to join him; Rollins instead sends up his “stooges” Joey Mercury and Jamie Noble instead.  After a brief rooftop brawl with the stooges, Rollins and Ambrose collided with some wild punches and head butts which the crowd ate up.  The two ended up brawling down the side of the cage, which ended with both flying off the cell and crashing through the announce tables at ringside….the EMTs were soon on the scene and the big tease was that the match was over before it started.

Of course, the crowd erupted as Ambrose got up off the stretcher and attacked Rollins, bringing him inside the cage and getting the match OFFICIALLY started.  Ambrose took control for the majority of the match, which is exactly what all the payback hype for this has been about.  As Ambrose pulled out a pair of cinder blocks in preparation for the ultimate revenge, the lights went out and a voice recited some crazy verbiage…it was obvious fairly quickly that a Bray Wyatt return was upon us.

The next thing we saw was the infamous lantern in the middle of the ring, projecting some sort of hologram…..it was all very Undertaker-like – and then Bray Wyatt appeared attacking Ambrose and making his return.  We figured Wyatt would return with a new look, or maybe even new family members (The Ascension from NXT possibly) but no such luck tonight.  Rollins took advantage of Wyatt’s attack and scored the pin on Ambrose.  We went off the air with Wyatt hitting “Sister Abigail” on Ambrose and locking in the beginning of the newest main event feud.

Not a bad show overall, but the main event outshines pretty much everything else.  Great to see guys like Ambrose, Rollins, and even Wyatt in the main event pictures since things have been pretty stale with the same guys the past few years.  Ambrose vs. Wyatt should be a show-stealing feud while on the flip side we get MORE Cena/Lesnar (but no word on when that actually will be)…..don’t they get we’d like to see Lesnar vs. some different guys?  Pretty sure Rollins vs. Orton will be another feud that might get officially going on RAW, should also be good a good series of matches.