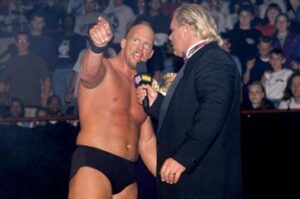 It’s hard to believe that what would become the most memorable moment in WWE King of the Ring history happened 19 years ago this year.  It was 1996, a great year for wrestling overall but not necessarily WWE at this point; business seemed to be down for the company as WCW just lit a fire with Hulk Hogan’s legendary turn and the formation of the nWo, ECW was revolutionizing the business with their edgy presentation, all while WWE was sort of floundering without a whole lot of direction; little did anyone know that Steve Austin (who was pretty much a mid-carder up until this point) would begin a path on this night to becoming arguably the biggest star in WWE history.

Leading up to King of the Ring 96, the event felt different because the tournament itself wasn’t the major focal point like it was in years prior; a WWF Title match between Shawn Michaels and The British Bulldog and a match between Jerry “The King” Lawler and The Ultimate Warrior were heavily pushed along with other non-tournament matches.  Also for the first time, only the semifinals and finals would be shown on the PPV as the rest of the rounds had already occurred on TV – this left 4 wrestlers in the tournament: “Wildman” Marc Mero, Steve Austin, Jake “The Snake” Roberts, and Vader.

Being it was 1996 and the Internet hadn’t spoiled everything about wrestling yet, there really wasn’t a clear picture (at least to me) as to who would win the tournament; actually, Steve Austin may have had the least chance of winning in my mind at the time.  Vader was making a big impact in WWE and was set to challenge Shawn Michaels for the WWE Title so he seemed like a shoo-in to win, Jake Roberts had just returned to WWE with an inspirational story about turning his life around which would make a tournament win seem like a logical feel-good moment, Mero was new in WWE so he probably had about the same chance Austin did of winning.

The fact that the brackets had Mero vs. Austin then Roberts vs. Vader made it seem like Mero vs. Vader would be the natural final, but the exact opposite happened.  Not only did Austin beat Mero, but disaster almost struck as Austin was injured in the match and had to visit the hospital for a huge gash in his lip that had to be sewn up.  Austin took that trip to the hospital, got stitched up, and returned for the final match against Jake Roberts who had pulled an upset win over Vader by DQ. 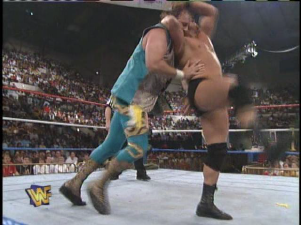 At this point, I still felt Roberts had a chance to pull off the “feel good” moment by barely beating Austin (especially after the way Austin destroyed Roberts in the match, to the point it was almost stopped) but there were bigger plans in the works and Steve Austin got the victory over the legendary Roberts and ignited what would be a complete career re-birth for Austin.

Austin had won the King of the Ring tournament, but the much more famous moment was still to come.  As Austin approached the podium where Dok Hendrix (Michael P.S. Hayes) waited for the new King to make his first proclamation, Steve Austin unleashed what is now one of the most famous wrestling promos of all time:

As Hendrix stood there stunned, a moment of realization kicked in for many – “this Steve Austin guy doesn’t care about rules, he doesn’t follow orders, he’s REAL.”  Keep in mind at the time, even saying “ass” in wrestling was a big deal…wrestling was still family entertainment, and seeing an edgy character that swore and rebelled against authority was something we hadn’t seen in WWE.  On this night, Steve Austin became the man you had to watch because you literally had NO clue what he was going to do or say next.

Of course, as we all know, “Stone Cold” and “Austin 3:16” would go on to become legendary parts of WWE history…but it all really began on the fateful night of King of the Ring 96.