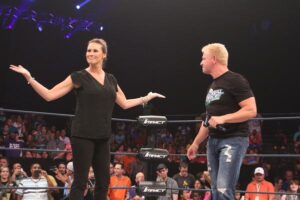 In one of the most peculiar situations to take place in wrestling in quite some time, Jeff Jarrett made a shocking return to TNA last night on Impact.  Why is it so shocking?  Maybe it’s the fact that Jarrett left the company to start his own Global Force Wrestling promotion that recently launched, maybe more so because Jarret walked out in a GFW T-Shirt and put his company over many times on Impact, or maybe just shocking that TNA allowed any of this at all.

When rumors began swirling yesterday that Jeff and Karen Jarrett had arrived at the Impact Zone, the immediate thought was that some sort of invasion or an inter-promotional deal was taking place; GFW literally JUST began running shows and could benefit from getting their name on Destination America via Impact so maybe this is all a bit of clever marketing?

It was a bit of a surreal moment to see Jeff and Karen Jarrett walk out to no music, shaking hands with the fans as commentators Josh Matthews and The Pope sold it like they couldn’t believe what they were seeing.  As Jarrett grabbed the mic and started to explain how and why he was in the Impact Zone, he told an interesting tale of TNA management simply wanting him to return at Slammiversary to compete in the match he created, the “King of the Mountain” match.  Jarrett brought up how he didn’t like the way he left TNA via backstage pre-tape, and going out with one last TNA match is the way he wants.  While this is a nice gesture from all involved, we still think there is more to it.

Jeff Jarrett and his father Jerry founded TNA in 2002; Jeff feels that one more big match is how he wants to leave the company he started and it was all supposedly TNA’s idea – it’s nice to see wrestling companies working together like this, but we still think there will be more to this story.  Jarrett getting a big push for his company is undoubtedly part of it, TNA getting to stir some MUCH needed controversy on their TV programming is another part of it, but is this a one-shot deal?

Jeff Jarrett returns for one last TNA match this Sunday at Slammiversary, and it seems like we’ll know more at that time if TNA and Global Force Wrestling will work together in the future.  Jeff alluded to the fact that there may be more in the future but didn’t talk about it on Impact.  At this point, maybe all the companies including Ring of Honor really need to look at how they can all help each other in order to give us SOME sort of viable competitor to WWE.