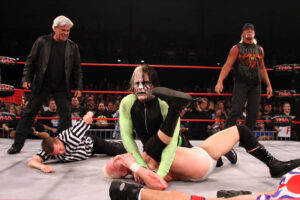 Bound for Glory was an event that brought mixed reactions, but has generated interest if nothing else.  The hype went on for months, the revelation of “They” was something that has been talked about and speculated on, and now finally we know “They” are.  Not long ago we speculated that Hulk Hogan and Eric Bischoff were “They,” and as it turns out, we were pretty dead on .  Even though Hogan had major surgery just last week, he pulled off a shocker and somehow made it to the ring for the festivities.

They set things up nicely so not everything was apparent, and it turned out to be more than just Hogan and Bischoff.  Jeff Hardy was actually the major turn that no one saw coming. They were definitely going for the nWo type vibe by turning the top face that hasn’t been a heel in a very long time, they got the trash-throwing reaction they wanted, at least for the first night.  So as of where we stand now, “They” are Eric Bischoff, Hulk Hogan, Jeff Hardy, Jeff Jarrett, and of course Abyss.

After all the hype, there has to be at least a little bit of disappointment to those that thought it would be Paul Heyman coming in or another huge shocking debut, but overall the angle is somewhat fresh and the story is something to follow, unlike what WWE gives us.

Hardy as a heel is something we haven’t seen, and with Matt Hardy trying to get out of WWE, there are interesting possibilities on the horizon.   Things went as far as Matt Hardy posting this video on his YouTube channel in which he implies it his time for him to “Cross the Line”: