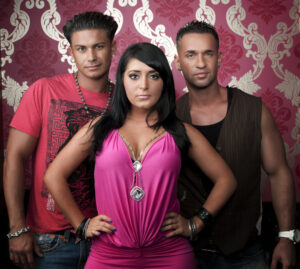 In a move that will no doubt have wrestling (and Jersey Shore) fans talking, TNA wrestling has signed former Jersey Shore cast member Angelina Pivarnick.  A few months ago TNA brought in Jenni “JWoww” Farley from Jersey Shore, and she had a catfight with TNA’s “Cookie” which did bring them some publicity.

The big difference here is that Angelina is no longer on Jersey Shore and never was the most popular cast member so she may not have as much of an impact (no pun intended) in TNA.  Word is that Angelina will debut at tonight’s Impact in North Carolina (which will air next week.)  Since Angelina has leaked this news, it has many wondering if this could be the “surprise of the year” that TNA had promised earlier this week which will air at the end of tonight’s Impact on SpikeTV.  If this is the case, TNA is going to receive some major backlash from wrestling fans as Angelina is in no way the surprise of the year, and in many cases isn’t even a welcome addition to the TNA Knockouts.

Angelina may garner a bit of mainstream interest, as sites like TMZ are reporting on her signing, but the real attention will be on the rumored match TMZ reported which would be Angelina vs. JWoww down the line. TNA is risking backlash from their fans, but is the risk worth it for the mainstream publicity?