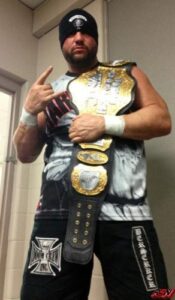 TNA Lockdown gave us the big payoff to the near 9-month Aces & Eights angle and solidified the company’s new top star.  Bully Ray was revealed as the leader of the group, as he defeated Jeff Hardy for the TNA World Title.

For the past few months speculation has run rampant that the leader of Aces & Eights might turn out to be Jeff Jarrett or Eric Bischoff, which would have been somewhat predictable because both were ousted from the company in separate storylines.  As the story rolled on, Bully Ray’s name started coming up as the possible group leader after the way he’s been positioned the past few months.  Many felt Bully was the ONLY option if they really wanted to gain something from the big reveal; that being a much-needed solid top heel.

The Bully Ray turn had become somewhat obvious the past few weeks since the over-the-top push of Bully being so proud of being Hulk Hogan’s “son-in-law” and his corny smiles and comments about being so in love with Brooke Hogan were just too much to believe given the source.  Hulk solidified the turn in a pre-match talk with Bully where he talked about his match with Andre the Giant and gave Bully the advice to “make sure they remember you”….which pretty much told us the turn was coming.

While I agree that Bully Ray is one of the top heels in wrestling that just needed one last little push to become THE top heel in TNA, the logic behind all of this bothers me.  If Bully Ray has been the leader of Aces & Eights all along, why has he been in matches with them and getting beat down by them for months now?  Will they explain that Bully wasn’t hitting them hard in those matches?  Will they say that Aces & Eights guys are so tough that they beat each other down for the sake of their cause?  I just hope they explain this SOMEhow.

TNA has sorely lacked a super strong top heel for a long time now in my opinion. Bobby Roode and Austin Aries are good heels but have been much more suited in their tag team than in the main event situation.  Bully’s transformation of his persona into a top singles guy has been awesome to watch, and he is ready to carry the company as the strong heel champion.

With TNA on the road weekly starting this week, this was probably the best move they can make given the lack of any big-name free agents currently on the market.  Hopefully, TNA can keep the momentum going and can make sense of the Aces & Eights story in the coming weeks.