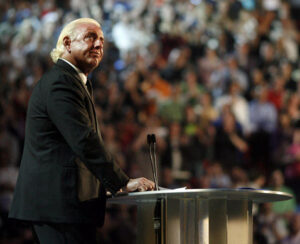 It’s WrestleMania week and all the festivities and coverage are about to go down.  One of the yearly highlights of WrestleMania week is the Hall of Fame ceremony held yearly the night before WrestleMania.  This year when the Four Horsemen were announced as inductees, there was immediate speculation on whether Ric Flair could/would attend the ceremony since he is currently under contract to TNA.  Today WWE ended that speculation as they have confirmed Ric Flair will be attending the Hall of Fame.

Some never questioned Flair’s attendance, because he stated he wouldn’t miss the event for the world and probably would have attended whether TNA approved or not.  But TNA has given their approval and Dixie Carter commented Flair’s induction in a classy manner.  It looks like the Horsemen’s induction will be a proper one and no angry “We Want Flair” chants will be necessary.  It will be no doubt be a memorable night seeing Ric Flair back with Arn Anderson, Tully Blanchard, and Barry Windham, and also seeing The Nature Boy back in WWE for one night.

The WWE Hall of Fame is this Saturday night in Miami and will air on USA this Monday before RAW.