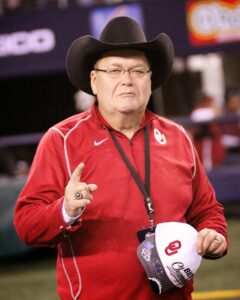 Jeff Jarrett’s new promotion “Global Force Wrestling” has made a few rumblings over the past few months about their launch but has held back for the most part when it comes to the promotion’s actual debut or even what talent they will be using; today for the first time the company has announced a major talent acquisition and it isn’t one that we will see in the ring, but rather behind the broadcast table as GFW has signed arguably the most decorated wrestling broadcaster of all time, Jim Ross.

“Good ‘Ol JR” will debut with GFW as he calls the action for their presentation of New Japan’s “Wrestle Kingdom 9” on January 4th.  This is a bit of a throwback since Global Force Wrestling is working with companies around the globe and presenting International events, similar to how WCW worked with New Japan in the early 90s to present the “Japan Supershow.”  Jim Ross is obviously the most well-known broadcaster in wrestling and is without a doubt the best man for the job, especially since GFW is presenting a real WRESTLING based product.

While he is a WWE Hall of Famer, Jim Ross’s relationship with WWE has been a sore spot for many of his fans over the years; from Ross being fired a couple of times in the early years for being “too southern” or even in recent years being removed from TV due to not having the “look” WWE wants, many feel that WWE has missed the boat on keeping JR in a prominent role which has by far hurt their product more than it has helped.  When Jim Ross “retired” from WWE, there was much speculation that he was more likely “pushed out” of the company and would rather retire than sit on the sidelines; since TNA has been floundering the last couple of years, jumping on to that sinking ship probably wouldn’t have been the best option, but with Jeff Jarrett building an International foundation for his company, the timing may be perfect for JR to come on board and help the company grow.

There is no word on Jim Ross’s involvement with Jeff Jarrett’s GFW beyond the Jan. 4 New Japan show, but if Jarrett has JR fully on board, it will be a major move for his company as Ross also has a storied history as the head of WWE’s talent relations department at a time that WWE was signing and producing some of the biggest stars in the Attitude Era.  Jim Ross can bring a lot to the table, hopefully, GFW utilizes him in the prominent roles that WWE missed the boat on.