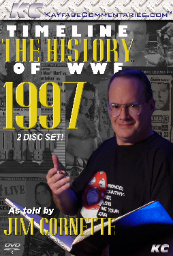 For years now Jim Cornette has been one of the most outspoken personalities in wrestling, so it’s no surprise that he has been one of the most popular shoot interview subjects for years.  “Corny” is very outspoken on his opinions and holds absolutely nothing back.  In fact, it’s no surprise that Cornette has done shoot interviews about his entire career that went 8 hours and still felt like everything wasn’t covered.

Kayfabe Commentaries has found a way to provide an informative and fulfilling Cornette shoot, by including him in their “Timeline” series and narrowing him down to one year that was full of historical wrestling moments.  1997 was one of the most eventful years in wrestling, and Jim Cornette was right in the heart of it all as a member of the WWF creative team.  Many people immediately think of the Montreal Screwjob as THE event that defined 1997, and while that was definitely the most memorable and an event that Cornette has some definite opinions on that he gladly shares, there was much more that transpired in 1997.

Cornette covers everything, month by month and event by event as they happened in 1997.  From Shawn Michael’s “losing his smile” multiple times, Bret and Shawn getting into physical fights backstage, Cornette’s one and only appearance in ECW and how it came about, the death of Brian Pillman, Vince Russo’s rise to the top as a writer,  and opinions on almost everyone on the roster at the time and insight to exactly how the WWE creative team at the time worked.  Even though they narrowed it down to 1 year, this DVD is still a 2 disc set in order to fit this over 3-hour interview and make sure every detail was covered.

If you are a fan of the Attitude Era, Jim Cornette, or just inside information on the inner workings of the business, this is a great DVD.  Jim Cornette is considered one of the best in the business on the mic and regarded as one of the most creative minds behind the scenes.  And if you especially enjoy a 100% unfiltered and uncensored point of view, Jim Cornette is the guy to provide it.  So head over to Kayfabe Commentaries and grab your copy of Timeline: The History of WWE – 1997 as Told by Jim Cornette.