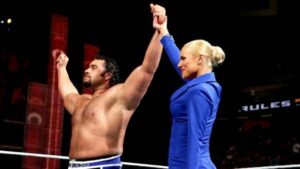 In case you hadn’t noticed, WWE REALLY wants you to watch the WWE Network; at the normal price tag of just……….NINE…NINETY-NINE, WWE was constantly reminding us of what a great deal it was – now for the month of November, the Network is FREE to new subscribers and they’re throwing everything out there they can to make everyone want to give it a shot…now including exclusive title matches.

Earlier tonight, for the first time in its history, the WWE Network featured a post-RAW main event that featured Sheamus defending the United States Championship against the undefeated Rusev.  This whole situation was something WWE hasn’t tried before, as they promoted the match on RAW and even had both Rusev and Sheamus wrestle matches on the show as a bit of a “warm-up” for their showdown later.  Sheamus lost via countout to Tyson Kidd, and Rusev squashed Zack Ryder on the live RAW broadcast.

In the biggest news of the night, Rusev actually defeated Sheamus in their WWE Network match and is the new United States Champion.  This was quite a surprise since it seemed like a match between the two could’ve been built over time and Rusev winning the U.S. Title could have been a big pay-per-view moment given his anti-American history.

We’re not quite sure if this was just a desperate attempt to get as many viewers as possible watching the WWE Network, or maybe the company felt that Sheamus wasn’t the right guy for Rusev to have a long term feud with over the U.S. Title since he’s Irish after all.

Now that Rusev is the new United States Champion, this fact will undoubtedly fuel his future encounters with the numerous superstars who will try to win the belt back for America.  The fact that Rusev beat Sheamus clean shows that Rusev is in for a major push, and will probably be a member of Team Authority at Survivor Series.

It’s hard to predict which American will get the “rub” to so speak by taking the U.S. Title back from “Mother Russia,” but Rusev and Lana gloating over this title win will undoubtedly heat up the hatred that the WWE Universe already feels for them; it’s an idea that worked like a charm going back to the days of Nikita Koloff winning the U.S. Title from Magnum T.A. in the 80s. in what was an all-time classic series of matches – hopefully, Rusev will have challengers that can produce a similar feeling for fans that love a little patriotism with their wrestling!