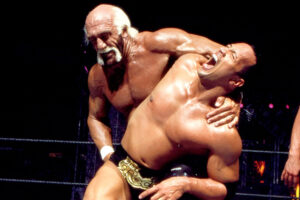 Twenty years ago today, one of the most memorable matches in WrestleMania history took place at WrestleMania 18. The Rock vs. Hollywood Hogan was a throwback to the old-school magic of pro wrestling that seemed to be gone in the post-Attitude Era. Was it the best technical wrestling match ever? No. Were the crazy spots involving falls from balconies and weapons? None. Still, to this day, it remains a top 5 WrestleMania match for me.

The funny part about this match being so legendary to me is the fact that I didn’t enjoy the buildup or even the decision to go with this match at all. The nWo had just arrived a month prior, The Rock was still on fire as a main event guy, but arguably had come down a notch and was starting to become a little more “Hollywood” than The Rock we saw in previous years. Hollywood Hogan vs. Steve Austin was THE match in my mind. The two biggest draws ever, finally in the ring for a once-in-a-lifetime match, but we never got it.

So Hogan vs. Rock it was, Icon vs. Icon, it wasn’t a bad idea, and maybe a good way to stretch things out until the inevitable Hogan/Austin showdown. Suddenly, things took a turn and went from Hogan and Rock agreeing to a match, to the nWo trying to literally murder the rock by crashing a semi into an ambulance The Rock was loaded into; of course, The Rock still showed up to WrestleMania just fine – yes, the forced buildup was terrible.

As the match was set to go, it may not have been until Hollywood Hogan’s entrance that it seemed certain magic was in the air. This was Toronto, a town Hogan main evented at WrestleMania 6 against The Ultimate Warrior in. The crowd didn’t care about who the bad guy was or about any attempted murders, Toronto was Hogan country! 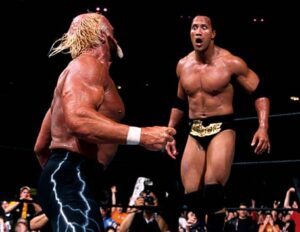 As The Rock entered and the pair faced off in the ring, the electricity in the crowd was undeniable, it was new school vs. old school and these fans were thrilled to see the old school being represented in a main event again! Just the fact that these two had the crowd in hysterics simply by locking up and shoving each other off set an unbelievable tone for the entire match. There are of course stories about this match, who made the decisions, what changed along the way etc., but hearing The Rock himself tell his side was a truly great insight:

So basically everything that built to this match was forgotten, roles were reversed, and Hulk Hogan came out of this match a good guy especially since Scott Hall and Kevin Nash turned on him after the match. All of this felt like it could’ve been stretched out for months, but it all occurred that night. While the fans loved it and he received thunderous ovations after Mania, Hulk Hogan was back in the red and yellow before we knew it, and to me, an opportunity as lost at having at least a year-long run of not only Hollywood Hogan, but also the nWo.

From my perspective, if you cut out the build and do away with the immediate aftermath of the match, The Rock vs. Hollywood Hogan is one of my favorite matches of all time. It proved wrestling fans can still love an old-school match, and keeping things basic can still work when you have talents at the level of Hogan and Rock.

Check out the ending of the match below – which still has me wondering, had Hollywood Hogan somehow someway pulled off the win, could he have had one more run as a top heel champion?