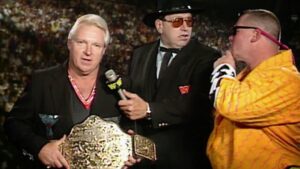 It’s been quite a while since there has been a new edition of the “Remember When…” series, so today we’re bringing it back with a look at one of the most shocking (yet somewhat under-recognized) moments from the early 90s.

In 1991 it was clear that the WWF and WCW were the two major pro wrestling companies in the country, and while they were in competition with one another, you would never hear one acknowledge the other.  Hulk Hogan had been the top WWF guy throughout the 80s and Ric Flair was that guy for WCW (formerly the NWA.)  The dream match between the two was the darling of wrestling magazines and fan conversation, but a real encounter was something that never seemed like it would be real…until a bombshell dropped by Bobby “The Brain” Heenan on an otherwise typical episode of “Wrestling Challenge” changed everything.

As the syndicated show was wrapping up with the traditional look at next week’s action, Bobby Heenan shocked hosts Gorilla Monsoon and Jim “The Anvil” Neidhart by debuting what had been the WCW/NWA World Heavyweight Title for the previous 5 years.  Monsoon tried his best to pretend not to know what belt it was, but to anyone that was a fan, the belt was instantly recognizable.  The utter confusion overseeing THIS belt on WWF TV and what it could mean was the perfect setup for Heenan to drop the REAL bombshell…coming soon to the WWF, was Ric Flair!

Ric Flair had been “suspended” from WCW just weeks prior and stripped of the title, but this made it clear that Flair was still in possession of the actual belt.  The backstage problems in WCW at the time are another story for another day, but ultimately Flair left the company without losing the title to anyone and kept possession of the belt itself.

Now this of course was before the Internet and before tons of people pretty much had an idea of what was going on in wrestling, therefore even though Flair was “suspended” from WCW as the story went, there wasn’t even a thought (at least in my mind) of the icon of the NWA and WCW actually going to the WWF prior to this day.  This bombshell that took only less than a minute to drop had opened the door for what in my mind was going to be the greatest dream match/feud in wrestling history…Hogan vs. Flair!

Of course, things took a lot of twists and turns and we never really got THE major showdown between Hogan and Flair, which many (including me) feel was one of the biggest cases of WWE missing the boat ever.  WCW sued WWF over the belt situation, which lead to it being blurred on TV and eventually Flair carrying a different belt since WCW won possession of the belt back.  WWF held a series of house shows between Hogan and Flair and obviously didn’t like how things worked out, so plans changed and the proposed Hogan vs. Flair WrestleMania 8 match never happened (or maybe was never planned at all depending on who you believe.)

One thing is for certain: In the summer of 1991 when Bobby Heenan debuted the WCW title on WWF TV and mentioned “another organization,” it was a moment for the history books the like of which probably wouldn’t happen again until the Attitude Era.  The acknowledgment of other promotions and other champions was taboo at the time, so getting to watch this unfold was pure magic.  Oh, what could’ve been – Bobby Heenan finally bringing in and managing the guy that could finally beat Hogan after all the years of Heenan’s attempts?  A WrestleMania match with the WWF and WCW titles both at stake? None of it came to be, but this day in the summer of ’91 provided an electric excitement that is rarely seen today: