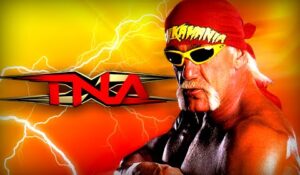 Huge news to report today as the wrestling world has lit up with the news that Hulk Hogan and Eric Bischoff are coming to TNA. Over a year ago, we speculated on a rumored Eric Bischoff and Hulk Hogan promotion and how the two could finally create a rival to WWE if done right. That rumor turned out to be Celebrity Championship Wrestling, which was a fairly entertaining show but it wasn’t the change wrestling needed. Then a few months ago the “Hulkamania Tour” was announced for Australia, which will feature Hulk Hogan vs. Ric Flair main events and a good roster of talent. Sounds like some fun shows, but again not something that will change wrestling here in the U.S.

Then today, the bomb dropped. Hulk Hogan was scheduled to have a press conference at Madison Square Garden to promote his new book, “My Life Outside the Ring.” No rumors, no speculation, just Hulk promoting his book. Then suddenly some rumors began to trickle in. Glimpses of TNA Spike TV banners were seen and a story was born.

News followed that TNA officials were on the scene and at the actual press conference, Hogan announced he has signed with TNA Wrestling. Dixie Carter was on hand to take part in what is no doubt the biggest signing in TNA history. Word has it that Eric Bischoff may not only be in an on-camera role but will be working to bring more TV coverage to TNA through his production company.

Of course, this news has many “smart marks” calling for another WCW, with Hogan bringing in his friends like Brutus Beefcake and the Nasty Boys and killing TNA, but we see this as exactly what TNA needs. Hulk and Bischoff bring controversy, coverage, exposure, all things TNA needs. Everyone can complain about who needs to be pushed and who deserves a spot, but there is no doubt that Hulk Hogan will bring TNA a record rating this Thursday. TNA is now the hot topic, with something that’s fresh and interesting, in an era where WWE is just getting worse.

On a related note, rumors are now abound that Ric Flair is also negotiating with TNA to come on board through a similar deal that Hogan and Bischoff are on board with. And for the first time, TNA is a trending topic on Twitter. Looks like Hulk Hogan and Eric Bischoff are already giving us what wrestling needs, just like they did 15 years ago.