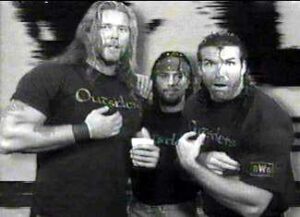 So I guess we now have confirmation that we aren’t the only ones who think the name “The Band” is an absolutely horrible name for Kevin Nash, Scott Hall, and Syxx-Pac.

The group has always been a legendary group of rebels and always had a cool name, whether it was “The Kliq” (which was the name of the backstage group that ran together in the mid ’90s,) the New World Order, or the Wolfpac. But “The Band” just sounds too much like a boy band reference or something. It references the phrase “The band’s getting back together,” which was fine for a while, but it just isn’t a fitting name for these guys.

Well, now Kevin Nash realizes this as well and has asked on the official Kevin Nash Twitter for fans to give their ideas on a new group name and lets us know that “The Wolfpac” is out, presumably because of a WWE copyright. Now the real news, Nash says that he will not only fly the winner to Impact, but he will also put them on TV! That’s right, think up something better than the horrible name “The Band,” and you can get on TV courtesy of Kevin Nash. Here is what Nash had to say:

“band? or does anyone have anything better? wolfpac is out . best name I’ll fly you to Impact and put  you on TV no shit . thinking caps on!!”