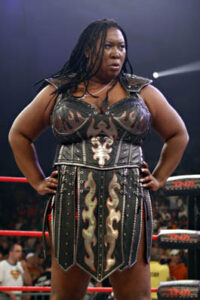 In what may be the culmination of a couple of months worth of controversy, apparently TNA has released Awesome Kong from the company. We originally reported weeks ago that Awesome Kong punched Bubba the Love Sponge over his comments about Haiti, which some believed was the start of a “shoot” storyline that may even lead to a match. Since then there has been talk of lawsuits back and forth, allegations of threats, etc. Now it looks like TNA is going to step away from the situation by releasing Kong. Kong posted the following on her official Twitter page:

“I’d like to thank (Dixie Carter) and all of the employees at TNA for wishing me the very best in my future endeavors.”

So it looks like the situation may be legit after all, and Kong is indeed gone. Now of course in the world of wrestling, anything could be a work, but being that hasn’t been mentioned on TV, it looks like the real thing. Kong was a huge part of making the TNA Knockout division a standout part of Impact, with her classic matches with Gail Kim ranking up there as TNA classics. If Kong really is a free agent, WWE could put together a nice run in situation for WrestleMania or the Monday after if they were smart. Kong could be a nice shot to help them in the upcoming new Monday night war which kicks off in exactly 1 week. Then again, it’s WWE, and Kong doesn’t exactly fit their mold for what they expect in a WWE Diva.