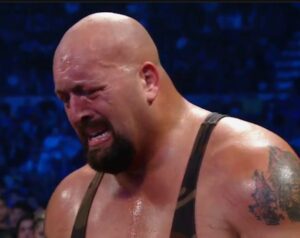 As many of you saw on RAW last night, one of the major angles of the night involved The Big Show being “fired” by GM John Laurinaitis. Now the idea is all well and good; The Big Show made fun of Laurinaitis’s voice last week on RAW, Laurinaitis is mad and fires Big Show over it, which makes sense. The problem lies with the way WWE portrayed Big Show during all this….a giant crying wimp.

As Laurinaitis was going back and forth with Show, he continued to ask for an apology and even demanded Big Show get down on his knees and beg for his job. Now in most cases when Laurinaitis confronts a guy like John Cena or CM Punk, they pretty much tell him where he can stick it. Somehow the veteran, multiple-time world champion, 7-foot giant breaks down and cries when faced with losing his job. That’s right, Big Show in the ring crying, and then on his knees begging and crying. The angle just made Big Show look like the biggest wimp in WWE, and it’s been moments like this that have kept Big Show from being regarded as one of the serious monsters of the industry.

WWE seems to forget the realism in a story like this. If Big Show was really being fired, how easy would it be for him to jump over to TNA with his buddy Hulk Hogan and be the top star and champion there? Dixie Carter would be all over it and would shell out the cash to get Big Show for even a few dates a month. And even if Big Show was done in the ring, the guy has made millions of dollars and would be just fine, nothing to cry over. So in the story, why wouldn’t the veteran Big Show walk out on Laurinaitis and tell him how easily he can find work elsewhere or that he doesn’t even need to work? I get that they are making Laurinitis the new age super heel GM, but this angle would have worked better and made more sense with a younger guy that was begging for his job.

Of course, this is all leading to a Big Show return at some point, but the sight of Big Show crying his eyes out like a baby will make it hard for many to ever take him seriously as a monster again. Then again, this isn’t the first time WWE has had Big Show in this type of crying role, maybe they just love his acting skills when it comes to crying?

Beyond everything else, WWE is pushing this angle full force as Big Show has been moved to the “alumni” section of WWE.com and will be “replaced” at Smackdown with CM Punk. Believability is good, giants crying about their job to a snarky GM is bad. In the grand scheme, some time off for The Big Show isn’t a bad thing, he’s played out at the moment and we’ve seen him in just about every role you can imagine. Time for some new blood to get the spotlight, hopefully.