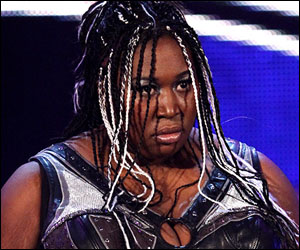 I believe Kharma may be going for the record here at PWR for most bizarre stories written about 1 person.  It started when she was released by TNA for punching out Bubba the Love Sponge and all the controversy that followed that situation.  Then in the middle of her big debut WWE run, Kharma announced she was pregnant and would have to leave WWE for a few months.  Anyone that saw the Royal Rumble this year saw that Kharma made her return in the Rumble match, but she hasn’t been mentioned on TV since which left many wondering about Kharma’s full-time return.

Her appearance at the Rumble also had many wondering the status of her pregnancy and how it turned out.  Shortly after the Rumble Kharma revealed that she gave birth to a healthy baby boy just a few weeks before the match, and it seemed like she was simply recovering a bit more before her full-time WWE return.

Now things have gotten a bit odd/sad again, as TMZ of all places revealed that Kharma (real name Kia Stevens) lost her baby before she was able to give birth, and lied to friends due to her emotional state.  It’s a really odd thing to just lie about, but a sad situation nonetheless.  No word on how WWE will handle this situation or Kharma’s return, but Kharma will be working with foundations to raise awareness about these types of situations.  Hopefully, her WWE career can pick up and turn into the long run we’ve been waiting for.