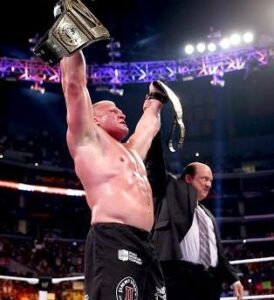 In what many are calling the best SummerSlam event in many years, the 2014 edition delivered some quality in-ring action and the continuation of many stories we’ve seen built over the past few months.  Of course, the main event of John Cena vs. Brock Lesnar delivered but maybe not in the way many expected, and the match with maybe the most build which was Stephanie McMahon vs. Brie Bella took a turn that will undoubtedly see that feud/story continue on.  Let’s jump right into the results:

My how the mighty have fallen; just a few months ago Cesaro was a part of one of the spotlight moments at WrestleMania 30 when he hoisted The Big Show up and over the top rope and won the Andre the Giant Memorial Battle Royal, and now he’s losing pre-show matches.  Of course, Rob Van Dam is no slouch to lose to, and they’re most likely just holding Cesaro off until the right time to put him back in the spotlight, but still, he has lost a huge amount of momentum lately.

Good to see Ziggler get the win here as the fans are obviously behind him every week and want to see him winning.  Miz on the other hand just seems flat and isn’t making an impact at all anymore so the title loss to Ziggler seems to be a no-brainer here.

Great to finally see an ongoing Divas Championship feud that has some twists and turns to it.  Good match that went hand in hand with how this feud has gone as far as both ladies being aggressive and not holding back.  Paige wins clean out of nowhere with a DDT to take back the Divas Title – should be interesting to see where things go next with these 2; Paige has really come into her own as a villain, which was the role she got such recognition for in NXT.

Really enjoyed this one.  The whole “USA vs. Russia” flag match story may seem a bit old school, but the fans are into it and this match had some great drama.  There was a bit of a brawl before the match even began and Rusev pointed out some sort of ankle injury he suffered early which lead me to believe that Swagger might actually pull the win off.  Very good back and forth match with the fans of course cheering on the USA.  In the end, Rusev gets the win and continues to move up the ladder of success.  The Russian flag was displayed and their anthem played as Rusev stood tall and even Zeb Colter got knocked out for his efforts.

Rollins picks up the win over his former Shield teammate. Another good match that of course saw the lumberjacks get involved on a number of occasions.  After the action spilled into the ring with the lumberjacks, Rollins uses his Money in the Bank briefcase to steal the win and continue on his path to eventually cashing in.

Bray picks up a much-needed clean win here; usually, we’d see the Wyatt Family get involved and all kinds of shenanigans, but this time we finally see Bray look dominant in victory.  Not really “getting” this feud as it seemed like it was going to be quite a psychological war being waged between Wyatt and Jericho, but nonetheless, a good match that could lead to further interaction between the two.

This match probably had the most buildup of any on the show as we’ve seen Stephanie and Brie spawn a feud based on The Authority’s original issue with Daniel Bryan.  This match was good for what it was, and it was a match that had a lot of emotion behind it.  Stephanie was aggressive in the ring and hasn’t lost a step even after a long in-ring layoff.  In the end, Triple H interfered and Brie’s sister Nikki also got involved, ultimately turning on Brie and knocking her out which allowed Stephanie to win with the Pedigree.  Was really hoping they wouldn’t go this route, as I fear they will show the Bellas on Total Divas being friendly and talking about how it’s all a “storyline” (sorry, old-schoolers really hate that.)  I’m in hopes that Nikki will explain that The Authority somehow forced her to do it, otherwise her involvement in the buildup over the past few weeks (the beatdowns, etc.)  will make no sense at all.

Can’t say I was overly looking forward to this one as it seemed just like a stepping stone for Roman who is obviously on the road to becoming a top guy.  A really good match though that saw some great near falls that added to the match.  Roman gets the win after a spear.

“The biggest fight of the summer” lived up to its name, just like this matchup lived up to the hype at “Extreme Rules” a couple of years ago.  This has by far been the most talked about match from SummerSlam as Lesnar utterly destroyed Cena in a fashion that may have not been seen in a WWE Title pay-per-view main event ever.  Just like a couple of years ago, Brock dominated Cena early (without Cena bleeding all over like the first match) and didn’t let up.  At one point Brock hit an F5 just seconds into the match and it almost looked like he would take the title right then and there.

Cena barely got a move in, and all I could think about was that realism finally returned to wrestling.  Any non-fan would look at Lesnar and think he would destroy anyone you put in front of him, and that’s exactly what happened.  Lesnar executed an unbelievable 16 german suplexes on Cena and wouldn’t let up until he quit.

Cena had a couple of moments where he hit an Attitude Adjustment on Brock that got him a near-fall, after which Lesnar proceeded to get up and laugh at Cena.  Cena locked in the STF as a last-ditch attempt to pull out an “out of nowhere” victory after being destroyed the whole match, but in the end, Lesnar escaped, hit an F5, and was crowned the new WWE World Heavyweight Champion.

Brock Lesnar SHOULD be the WWE Champion, plain and simple.  He has star power, he’s a natural prick, and fans will pay to see guys attempt to beat him.  Above all else, Lesnar is LEGIT.  Legitimacy is something wrestling has always struggled to achieve, but anyone that sees Brock Lesnar knows that he is the real deal and could legit beat almost anyone in the wrestling business.  I’m looking forward to Brock’s reign, as it should be a truly unique journey that hopefully lasts for the amount of time it deserves.