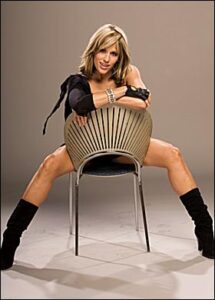 A bit of unexpected breaking news from WWE.com today, as it has been announced that Lilian Garcia has re-signed with WWE and will be the new full-time Smackdown ring announcer.

For anyone that isn’t aware, Lillian was the WWE ring announcer for 10 years beginning in 1999 and retiring in 2009 to pursue other interests.  Lilian was also known for her powerful renditions of the national anthem that she performed on a regular basis during that time frame.  Since she left, WWE has tried out a few different female ring announcers but none of them had the presence of Garcia.

Lilian Garcia had been hosting the RAW Aftershow on Afterbuzztv.com and featuring former WWE talent on the show, but it remains to be seen if she will continue in that role now that she is back full time with WWE.  While everyone is happy to see Lilian is returning, many wish Lillian was coming back to RAW and we can’t argue that we would rather look at her every Monday than Justin Roberts, but time will tell how the ring announcer situation will work out.