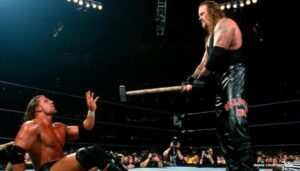 We found it quite humorous earlier today when we read that WWE has instructed their writing team to not bring up the fact that The Undertaker and Triple H have already wrestled at a WrestleMania (17).  For anyone that has only become a WWE fan in the past few years, the fact is true.  Triple H is already a part of The Undertaker’s 18-0 streak.

WWE is obviously trying to not remind people of this fact so they can build their WrestleMania 27 match so Triple H comes across as a serious threat to the streak.  Granted, Triple H and The Undertaker are higher-level stars than most in WWE, and their match still has a “big-time feel.”  At WrestleMania 17, there wasn’t much of a story leading to their match, and overall it felt like the match was thrown together because they had 2 big stars that had nothing else to do.  It feels pretty similar this year, as it seemed like Triple H just suddenly decided to be pissed off at The Undertaker and made a challenge.

In the video below of their WrestleMania X-7 match, we also get to see some of the buildup to the match, and it features Triple H talking about beating everyone…until Undertaker lets him know that he’s never beaten him.  Sounds pretty familiar, the only difference being it was “The American Bad Ass” version of The Undertaker back then.  So if The Undertaker does defeat Triple H at WrestleMania 27 (which I definitely think he will,) Triple H will join his DX partner Shawn Michaels, and Kane as the three guys The Undertaker has beaten twice along his WrestleMania streak.