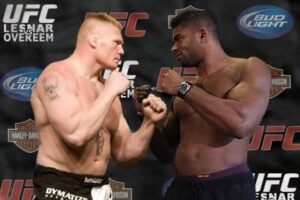 After 14 months away from the UFC due to surgery, Brock Lesnar returns tomorrow night to do battle with Alistair Overeem.  Overeem was the last Strikeforce Heavyweight Champion before the division was absorbed by UFC, and he will make his UFC debut tomorrow night.  I mention the date because UFC 141 isn’t on the usual Saturday night, but is on Friday night due to the holiday.

The heavyweight battle at UFC 141 will determine the number 1 contender for the UFC Heavyweight Title and will be a battle of explosive beasts that isn’t expected to go the distance.  Most everyone has said this will be a classic striker vs. wrestler battle, with Overeem going for a KO and Lesnar looking for a takedown.  Lesnar last fought 14 months ago when he was knocked out by Cain Velasquez, which has many questioning if he is fully prepared for this major fight.  Overeem hasn’t lost a fight in 4 years, but UFC President Dana White pointed out that he doesn’t feel Overeem has fought any of the best fighters in the world lately.  Can he hang with UFC’s big boys in the heavyweight division?

The trash-talking has been going on for weeks, with Overeem claiming he’s going to send Lesnar back to WWE.  Lesnar claims he feels better than ever after his surgery, and seems hungry to get the UFC Title back.  Unlike wrestling these days which doesn’t give us anything on holidays, UFC is giving us a great kickoff to the New Year’s weekend.  Lesnar vs. Overeem will be explosive and will give us a pretty clear view of the heavyweight action we will see in the UFC in 2012.

As wrestling fans, we can’t help but go for Brock in his big comeback fight, but one has to wonder if Overeem’s striking will bring Lesnar down, especially if it’s a body shot coming off such major surgery.  If you’re around the Las Vegas area, tickets to UFC 141 are still available, be there for this epic showdown tomorrow night!