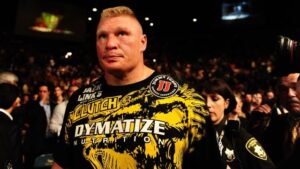 Just yesterday we previewed the Brock Lesnar vs. Alistair Overeem fight at UFC 141, and now tonight we can report that Brock Lesnar’s career in the UFC is officially over.  Lesnar was defeated with ease by Overeem, and the once explosive Brock we used to see in UFC was long gone.  Leading into the fight, tons of experts said that the key to Brock winning was using his wrestling skills and avoiding standing up with Overeem.  Brock pretty much did the opposite by trying to stand up with Overeem, and eventually, a couple of knees to the body and finally a liver kick from Overeem sent Lesnar to the ground before the referee stopped the fight.

All of this happened in just over 2 minutes.  Lesnar barely got a couple of punches in and failed at taking Overeem down at all.  After his horrible showing, Brock Lesnar announced his retirement from the UFC.  Lesnar has been given much credit from the MMA community and fans after the fight for even attempting to fight again after the surgery that removed a foot of his colon.  Lesnar also claimed that had he won, he had already promised his wife (Sable) that he would have retired after winning the title one more time.

Within seconds of Lesnar’s retirement, the Internet was buzzing with rumors and predictions that Lesnar would be on his way back to WWE.  While I think that is definitely possible at some point, I don’t think we will see it for a good while.  It would be hard for WWE to promote Brock’s return so close to such a crippling loss.  I think when the time is right, WWE will use Brock for a big match but not for a full-time return.

Brock Lesnar had a good run in UFC that created a ton of interest whether fans loved him or hated him.  Brock created “must-see” fights that made money for all parties involved.  Brock retiring is a big loss for many crossover fans from the wrestling world that may have tuned in just to see Brock’s fights.  It will definitely be interesting to see where Brock Lesnar’s career goes from here.