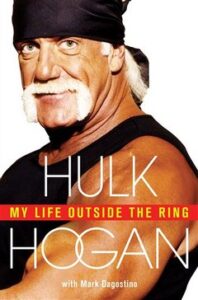 With January 4th rapidly approaching and TNA Wrestling about to go to war with WWE by going head to head on a Monday night and featuring the debut of Hulk Hogan, what better time to check out the Hulkster’s new book.

We received a copy of “My Life Outside the Ring and really wasn’t sure what to expect.; we’ve heard all the stories from Hulk in his first book and multiple DVDs, so what else could this offer? Well, this book took a pretty cool approach in focusing more on what was going on outside of wrestling during all the years of many big runs in wrestling. More detailed telling of Hulk’s early life and early days of getting into wrestling is told. Hulk hits his whole career here and is interesting for anyone who was a fan of “Hogan Knows Best” as it tells the full story on his marriage to Linda, having kids, etc. It also holds nothing back on the drug and steroid use that went on during certain time periods, including Hulk’s own use and even Linda’s.

The book doesn’t paint a very pretty picture of Linda, but who expected it to? Of course, the book is filled with some of the famous tall tales that Hulk is known for, with a few dates and occurrences being off, but again, that was expected.

It boils down to if you are a Hulk Hogan fan or not. If you are a Hulk fan, the book is a fun read that gives more details and a few unknown facts that are cool to learn. If you are not a Hulk fan, then you probably won’t enjoy it and you will be annoyed by the tall tales and truth-stretching that goes on. The complete divorce and car accident involving Hulk’s son Nick and John Graziano is also covered extensively.

It gets a little preachy toward the end, as Hulk talks about recent years going through his divorce from Linda and how he read the book “The Secret,” which gave him a new outlook on life. Overall, not a bad read, especially if you enjoy getting all the Hulkamania you can get.