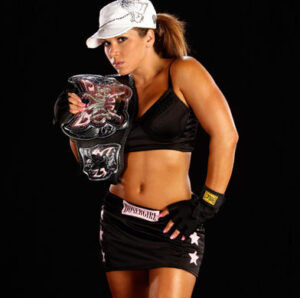 In some surprising breaking news, at least for a couple of these names, WWE has done another one of their infamous house cleanings. Topping the list of releases is Mickie James, who comes as quite a surprise as she is one of the top face Diva’s in WWE, and is usually always in one of the top Diva storylines.

There were rumblings last week that Mickie was getting heat backstage recently due to her behavior on the recent overseas trip, as she was said to be partying at night and was late arriving numerous to the bus’s the RAW crew was traveling on, thus holding up the rest of the crews travel. We can’t confirm these rumors, but apparently, something had to go wrong because Mickie is no longer with WWE.

Also making the list of releases are Shelton Benjamin, Kung Fu Naki (who has somehow been in WWE for over 10 years!) Katie Lea Burchill, Slam Master J (aka Jessie aka Ray Gordy,) and Jimmy Wang Yang. Of this list, Shelton Benjamin is probably the biggest name. Benjamin has always been looked at as one of the best athletes in WWE, but never really clicked with any gimmick or storyline. The rest of the group aren’t too surprising, as none have been used very much at all on TV, and we’re surprised they lasted as long as they did.

All these talents could pop up in TNA, with Mickie James probably being the top name TNA can go after, with Benjamin not far behind. The rest are hit or miss, although Jimmy Yang could fit in the X division or even in Ring of Honor. Releases always create controversy and freshen things up, and we will be looking for more information on Mickie’s release, as basically, WWE is handing her to TNA, where she spent a short time in the early days of TNA.