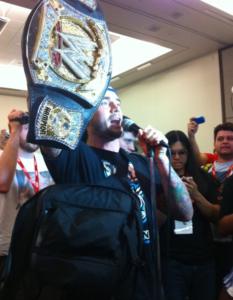 There has been an awesome buzz in the wrestling business over the past few weeks, beginning with CM Punk’s now infamous shoot promo a few weeks back, and leading up to Triple H relieving Vince McMahon of his duties this past Monday. Now with Triple H in storyline control of WWE, a new era is upon us, one that will apparently see much more realism and new ideas come to fruition.

Earlier today WWE held a panel at San Diego Comic-Con, and the new WWE “CEO” Triple H was in attendance at the event. For years now San Diego Comic-Con has been the leading media event of the year, with movie trailers being debuted and tons of celebrities in attendance. WWE has had a presence in the past at the event, usually revealing their action figure line for the year, but this year the new era of “anything can and will happen at a WWE event” was finally utilized.

Video has now surfaced of WWE Champion (or former champion according to this past Monday’s RAW) CM Punk invading the WWE panel and confronting Triple H. Punk arrived with a megaphone to a huge reaction from WWE fans. Punk had a few snide remarks for the new WWE figurehead and asked him when Zack Ryder was going to be put on television. All of Punk’s questions and comments are about things that would never be allowed on anything WWE-related in the past, but it finally seems that someone is noticing the fans react when real situations are brought into the stories.

This is a great example of WWE creating interest once again, as evident by the reaction of the Comic-Con fans. Here is the first video that has surfaced of CM Punk invading San Diego Comic-Con: