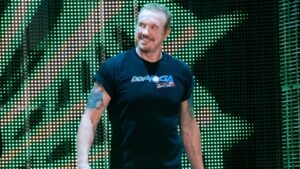 The 2017 WWE Hall of Fame class just gained yet another deserving member as Diamond Dallas Page is this week’s inductee announcement.  Page deserves this induction if for nothing else, his job of literally saving the lives of wrestlers like Jake Roberts and Scott Hall in recent years, but he just so happens to have a Hall of Fame-worthy in-ring career too.

I first saw Diamond Dallas Page in the 80s as a manager in the AWA; he was loud, colorful, and seemed great in his role as manager of tag champions “Badd Company.”  Page’s managerial talents were seemingly verified when he debuted as the new manager of the Fabulous Freebirds in WCW in the early 90s, but his transition to becoming a wrestler at the age of 35 seemed like a major step backward to me at the time.

“DDP” went from a big-time manager to a low-level wrestler that usually lost in no time; I never saw Page becoming a world champion or any champion for that matter, but he became living proof that hard work and dedication definitely pay off.

It wasn’t until the mid-90s that Page actually started getting involved in feuds and actually had a WCW Television Title run – still, it seemed like Page would never get much further than that level.  It wasn’t until the nWo era that Page had the opportunity to make a big leap toward becoming a major star.  As nWo members (and former Page partners) Scott Hall and Kevin Nash offered Page a spot in the group, Page took a stand and delivered his patented “Diamond Cutter” instead.  That moment really made Page stand out in an era where the nWo ruled over just about everyone in WCW.

Next up it was a feud with the one and only “Macho Man” Randy Savage that elevated Page to even higher levels in WCW.  Savage was also a member of the nWo and was of course already a legend at that point.  Being associated with Savage much less getting pinfall victories over him definitely established that DDP was a legit star in WCW that now fit into the main event picture. 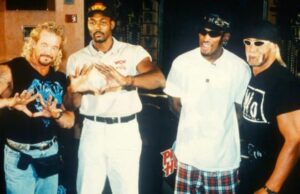 Page spent the late 90s in some of WCW’s top stories and matches, winning the U.S. Title, teaming with NBA star Karl Malone and late-night legend Jay Leno, and having quite possibly the best match of Goldberg’s career in 1998.  Page would ultimately even win the WCW Championship and hold the title three times.

In 2001 Page made a memorable WWE debut as he was revealed as the “stalker” of The Undertaker’s wife Sara on an episode of RAW.  While Page’s WWE run didn’t turn out to be as successful as his time in WCW, Page is still remembered as having memorable matches at the time and he has continued to appear on special occasions like the Royal Rumble and the Andre the Giant Battle Royal.

As previously mentioned, Diamond Dallas Page’s name remains in wrestling headlines now due to the fact that he has helped so many wrestlers (and others) via his “DDP Yoga” program.  It’s amazing to see wrestlers who are in bad shape go to Page and get help and completely turn their lives around. It’s not uncommon to see wrestling fans online directing anyone with a problem to reach out to DDP, and we’re sure everyone he’s helped will be cheering on as “DDP” officially becomes a member of the WWE Hall of Fame.