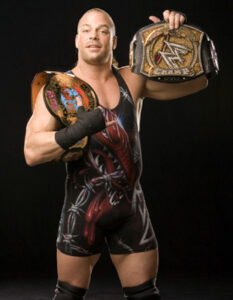 In a surprise announcement made in a video package at WWE’s “Payback” pay-per-view, Rob Van Dam is set to return to the company at the “Money in the Bank” PPV.  Rumors swirled a couple of months ago when Van Dam showed up at the WWE Hall of Fame that a return may be imminent, but there was never any confirmation until the video earlier tonight.

Rob Van Dam was most recently seen in TNA just a few months back, but his entire time there has to be considered a major disappointment.  RVD floundered in meaningless matches for most of his time in TNA before getting a run as X-Division Champion.  We always felt like RVD wasn’t utilized to his potential for most of his time in WWE, but TNA was much worse.  It always seemed like Paul Heyman was the only guy that really knew how to book RVD and bring out his main event star power.  I can’t say I would be mad to see Van Dam join up with Heyman since he is an original “Paul Heyman guy. ”

It will be interesting to see how WWE uses RVD this time.  He’s way over with the fans and has the potential to have some classics with guys like Daniel Bryan, CM Punk, The Shield, etc.  WWE has used Rob as a main eventer at times and at other times a mid-carder, but we wouldn’t be shocked to see him thrown right into a Money in the Bank match so we get all crazy RVD spots in a ladder match right out the gate.

WWE ratings aren’t exactly hot right now, so bringing back a recognizable guy who can still deliver in the ring isn’t a bad idea in my eyes; having him lose every match right away would be.  Why not let Heyman bring back that cocky RVD that ruled ECW for so many years?  Not the guy who walked around in the back answering with “whatever” to anything said to him, and not that guy that loses meaningless matches every week.  Hopefully, this (possibly final) RVD run in WWE will bring us exactly what we and WWE needs…..The Whole F’n Show!

Check out the awesome video WWE used to announce RVD’s return, this is how a lot of returns/debuts were done in the glory years and it worked to perfection: