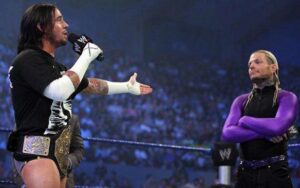 A couple of months ago the hottest story making the rounds in the Internet wrestling world was the controversy surrounding Matt Hardy’s release from WWE. Much of the controversy came from the story that Matt had been sent home from an international tour due to his “condition.” One story making the rounds was that Hardy was passed out backstage, and CM Punk was the one that went and told on him. Matt has since moved on and many are counting down the days until he is free to go to TNA, but in this video, Matt’s brother and TNA World Champion Jeff Hardy unleashes his thoughts on CM Punk and holds absolutely nothing back. There is some definite heat on Punk from the Hardy’s, and this video explains some of it. Matt also makes an appearance at the end of this video, and both he and Jeff appear to be in an….” interesting state” if you will, but that is just pure speculation on my part.

**Warning** The video contains graphic language and gestures, do not view if that sort of thing bothers you.**