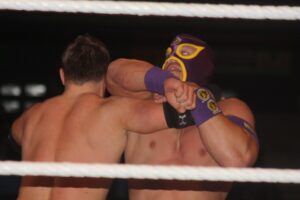 Well after tonight’s WWE house show, we have some indication of how the “John Cena is fired’ angle will play out (at least at house shows.)  As the story goes, John Cena reported on his official Twitter page that his “cousin” Juan Cena had just signed with WWE.  Now of course this means that Cena will be doing the classic gimmick of working under a mask and acting like it’s really not him when it will be obvious it is.  We’ve seen Dusty Rhodes use this at the Midnight Rider, Brian Pillman as the Yellow Dog, and even Hulk Hogan as Mr. America.  “Juan” Cena debuted tonight at a WWE house show (see picture,) so this will be the way they will be able to keep Cena on house shows and draw in the Cena fans while keeping the “fired” angle going on TV.

Now, this does not necessarily mean we will see “Juan” on TV ever since Cena tweeted last week that he had bought tickets to tonight’s RAW, so he will be at the show using the “bought a ticket” gimmick for this week at least.  Of course “Juan” could pop up on TV if they go with the usual story that goes with the mask angle, which is the heels trying to unmask the face and prove their identity, while the masked man fights to get the wrestling re-instated.  Last week’s RAW was a hit, and I am usually bored to death by RAW, but I will admit they are doing some new things and I am interested to watch this week and hope they can keep up the momentum from last week.