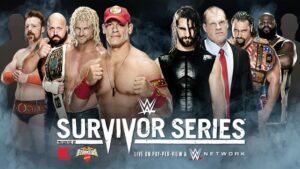 The main event for the 2014 Survivor Series will be a traditional 5 on 5 elimination match that will feature Team Cena taking on Team Authority; the match undoubtedly came together to fill the void that is left since current WWE Champion Brock Lesnar will not be on the show and a meaningful match was needed. The match did seem to pop up out of nowhere as The Authority suddenly confronted Cena about joining them or else stepping aside as the new generation takes over; Cena being his “good guy forever” self of course turned down the offer, and a Survivor Series match was born.  The stipulations for the match have been set, but the real question is, what is really on the line in this main event?

The surprise return of Vince McMahon last week on RAW “upped the ante” for the Survivor Series main event as he announced if Team Cena defeats Team Authority, The Authority will no longer be in power.  This has led to speculation that the long-rumored storyline that will see Vince feud with Triple H and Stephanie may finally be kicking off, but then again it’s hard to tell based on the interaction the three had on RAW.  Really without this stipulation, the match didn’t have a whole lot to it; if The Authority won, they got to brag to Cena that they were right – if not, Cena gets to brag…..not a whole lot on the line in today’s wrestling world.

Now that they are teasing that The Authority will be out of power if they lose, the match has definitely gained a lot more interest and has given fans something to speculate on.  The only downside as far as intrigue goes is that there really isn’t any repercussion if Cena’s team loses other than The Authority getting to laugh in Cena’s face.  The whole situation really makes it look like Team Authority will walk away with the win and their reign of terror will continue a bit longer.

So unless a stipulation is added in the case that Cena’s team loses (maybe taking away his shot at Lesnar?) this match may come down to simply giving some new Superstars to get a bit of the “rub” by participating in a main event.  The fans have demanded Dolph Ziggler get a bigger role for months now, Ryback (who will probably now end up on Team Cena) is suddenly back as a force that the fans are cheering again, Seth Rollins has been thrust into the spotlight ever since splitting from The Shield, Rusev has received a huge push that now includes a U.S. Championship run, and from the looks of things Luke Harper will be a last-minute addition to Team Authority which will be his first chance to shine on his own without The Wyatt Family.  These superstars may benefit the most from participating in this main event match, and will hopefully shine in the match itself.

On the flip side, Big Show, Mark Henry, Kane, Cena, and even Sheamus have been varying degrees of stale over the past few months (years in some cases) but are still big enough stars to help get the younger guys over.  A match like this could elevate many of the stars that fans want to see move up the ladder, and will hopefully put some of them in a position to be fresh opponents for Lesnar.  Sadly, as of now Cena still has yet another shot at Lesnar which seems so overdone at this point especially when you have fresh talents like Ziggler or even Ryback that the fans care more about.

It is nice to see a traditional Survivor Series elimination match as the main event, and the talent involved in Team Cena vs. Team Authority should make it a good and exciting match – we just hope WWE makes it mean something and doesn’t treat it as a filler main event to bridge the gap to the next Lesnar title defense.