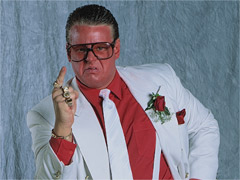 It looks like we aren’t the only ones who realize that TNA has become boring, repetitive, and directionless over the past few months.  Some would say it’s always been that way, but these past few months have gotten really bad with all the guys flip-flopping between heel and face and the stories being almost impossible to follow.

Last month there was word that Hulk Hogan and Eric Bischoff’s deals were up and they were done with the company.  Then in the past week, it came out that Hogan has signed a new deal and will be sticking around, and now today it was no surprise to hear that Bischoff also renewed his deal.  So with those guys staying, it didn’t seem like there would be much of a change from what we’ve seen recently.  Yes, they’ve branded “Impact” for the TV show, they’ve given things a fresh look and brought in a few good new talents, but it’s the writing that seems to be suffering horribly.

Of course, behind all the Bischoff and Hogan presence, it’s been Vince Russo who has been the head writer for TNA the past few years.  Russo has been around off and on since the beginning of TNA, but since his work in the Attitude Era, I can’t think of anything great Russo has done.  It seems someone has finally realized that Russo has been stagnant for a long time, and a change was in order.  Earlier today it was announced that Bruce Prichard has been named TNA’s new head writer.

Just a couple of months ago Bruce Prichard was brought in to replace Terry Taylor’s spot behind the scenes in TNA.  Prichard was also instrumental in WWE’s Attitude Era and was one of Vince McMahon’s right-hand men for years.  Of course, if the name doesn’t ring a bell, our pic in this post serves as a reminder that Bruce Prichard was most well known as “Brother Love” in WWE.

Now the big question is, will Bruce Prichard make a difference?  Over a year ago when there was word that Paul Heyman was negotiating with TNA, it seemed like change might happen and the next red hot wrestling promotion would be TNA.  I’m not sure what direction Prichard will take things, but hopefully he will be bold enough to get some real change going and step away from the Russo style that has become unwatchable.  Heyman would be my number one choice, but here’s to hoping Prichard can at least make some sort of difference.