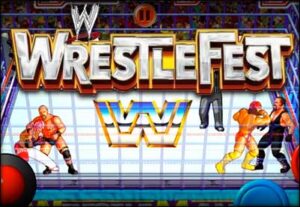 Last month here at PWR we took a trip down memory lane as we took a look at the Joe Gagne Funtime Pro Wrestling Arcade series, and paid particular attention to the classic WWF arcade game “WrestleFest” that ruled arcades in the early ’90s.  Little did we know, that now a month later we would be covering an all-new version of WrestleFest that is now available for the iPhone and iPad.

Now THQ has kept almost all of the vibe from the original WrestleFest, which seems to have made many gamers mad.  Since its release, I’ve seen plenty of complaints about the game looking bad graphics-wise, having too simple gameplay, and basically being a joke of a game.  What no one gets is that this game is just like the original Wrestlefest.  Big cartoony-looking characters, simple gameplay, and most of all FUN.  All THQ has done is put some current guys like Randy Orton, Rey Mysterio, and John Cena in with more recent legends like Steve Austin and The Undertaker, and of course some original WrestleFest alumni like Jake “The Snake” Roberts.

Even better, there are plans to release 30 more DLC characters that will include more Superstars and legends.  The first pack is already available and includes Triple H, Shawn Michaels, CM Punk, and another original WrestleFest alumni in The Big Bossman.  The new version of the game has a little more depth than the first, with a Road to Wrestlemania mode to go along with the traditional tag team career and Royal Rumble modes.

Basically from what I’m seeing, if you lived the WrestleFest era in 1991, this will be a fun game to have and re-live.  If you are a younger fan who is used to the current generation of games and think the old school games suck, this isn’t for you.  The new and improved WWE Wrestlefest is now available at the WWE Games site.