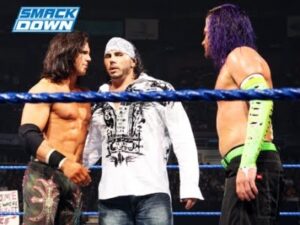 Smackdown has been a very different show than RAW lately. With a newly heel CM Punk leading the charge against World Champion Jeff Hardy, who is definitely the most popular guy on the brand. Throw in John Morrison, who’s been booked as a new face (which we still can’t get used to) who kept on getting the best of Punk up until last night’s show. Last week we got a very interesting twist.

WWE has been running an angle for a while where Mr. McMahon isn’t happy with the way Teddy Long is running SmackDown and has put him on probation. Last week when Hardy and Punk had a wild brawl that couldn’t be controlled, Vince announced that a special mystery enforcer would be appointed for the match. When match time came around, Matt Hardy’s music hit, and he returned to Smackdown from an injury, with the thought being that Jeff was screwed now that his evil brother would be at ringside.

As it turned out after Punk accidentally nailed Matt toward the end of the match, Matt actually counted the 3 count for his brother Jeff to win the match, and then walked off. This week on Smackdown, Matt actually came to the aid of Jeff and Morrison as they were getting beat down by Punk and the Hart Dynasty. As Matt helped up Jeff, it sure looked like Matt would nail Jeff and once again ignite their feud that started at last year’s Royal Rumble. That wasn’t the case, as Matt helped Jeff up, said some words to him that we couldn’t hear, and before we knew it, Teddy Long was announcing next week’s main event as the Hart Dynasty and Punk vs. John Morrison and the Hardys.

So let’s stop for a minute, Matt comes out, helps Jeff, says a few words, I guess they were “Hey man, sorry I tried to kill you a few months ago, let’s be friends again…” and all was good. Seriously, does anyone else remember that after Matt destroyed Jeff with a chair at the Royal Rumble, it was revealed that Matt was the one who had been attacking Jeff and even ran him off the road in North Carolina?

All story of course, but they better have a GREAT explanation as to why Jeff can easily forgive Matt and trust him again. Matt has claimed that there is a great story behind all this complete with explanation, but wow, these 2 had quite a feud and even a big Wrestlemania match this year, but all was forgiven REAL fast. Hopefully, it’s not a case of “Matt helps Jeff, Jeff forgives Matt, then a few weeks later, Matt turns on Jeff again, and they feud again.”

The Hardy vs. Hardy feud has been tried a couple of times now, and it just doesn’t work. The idea of a Hardy Boyz reunion tour has spread across the net the past few days, and that is probably the best idea. Matt and Jeff as main eventers on Smackdown against a great heel like Punk and whoever aligns with him is the best bet. The Hardy feud wasn’t great this time around either, so we can all just pretend it never happened like they seemingly want us to, and we’ll enjoy the Hardy’s in the top face position that they do so well in. With Jeff pondering taking time off again, reuniting him with Matt will either help his choice to stay or give us a main eventer to take Jeff’s place if he does decide to take off into the sunset once again.