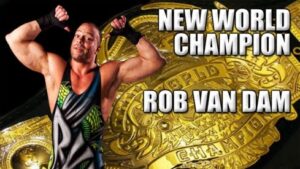 After a hot Lockdown pay per view last night in St. Louis, TNA went all out and took advantage of the fact that the WWE RAW crew was stuck in Ireland due to the volcano. RAW was a thrown-together show with mostly Smackdown guys, and typical WWE “comedy,” while TNA decided to bring out their big guns. Not only did they give us Rob Van Dam vs. Jeff Hardy in a number 1 contenders match, but Hulk Hogan also announced that the winner would get their title shot against AJ Styles tonight!

RVD won a good match with a lot of highspots from Hardy and RVD, with RVD winning the match with the 5-star frog splash. The predictable train of thought would say that from this point, RVD vs. Styles would end in some sort of DQ or run-in and a rematch at the PPV would be set up. But TNA has been throwing swerves at us lately, and in a huge swerve, RVD won the TNA Championship from AJ Styles with the 5-star frog splash.

The Impact Zone went wild, confetti fell from the ceiling (wasn’t a huge fan of this since it gave away the planned ending) but it was a great moment that no doubt created buzz. RVD is arguably the top face in the company, and now he is in the main spot, as he should be. For a few weeks, it looked like RVD would once again be used wrong and just grouped in with other guys in matches, but it looks like TNA realizes that RVD and Hardy are the guys they need to run with, and of the two RVD is by far the more reliable to run with at the moment.

With RVD as TNA Champion, be ready for tons of 5-star title matches with natural opponents like Kurt Angle, Samoa Joe, Desmond Wolfe, Mr. Anderson, and even re-matches with Hardy and Styles. It was one of the best moves TNA could make in my opinion…AJ Styles is talented, but with a roster the caliber of TNA’s, AJ is not your heavyweight champion.