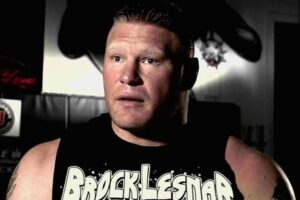 It’s been said since his return a couple of weeks ago… “Brock Lesnar, is the new face of WWE”….but I believe last night’s pre-taped promo is what really solidified the fact.  The site of Brock’s initial return caused a frenzy in the crowd with fans visually ecstatic, then Brock punching Cena in the face and bloodying him up the following week – both were really game-changers, but Brock’s words are what could bring fans back that haven’t been able to stomach the “Cena Years.”

In 1996, “Stone Cold” Steve Austin let us all know that he really didn’t give a damn about the fans, management, or anyone else.  The rebellious rampage he went on for the next few years lit a fire that came to be known as the Attitude Era.  Now in 2012, we’ve had to sit through years of John Cena proclaiming how he loves the fans and will never change his morals, etc., etc.  Last night Brock Lesnar let us know that he doesn’t give a damn about anything but hurting people, and he came across as a cocky prick of a beast – the kind of guy males 18 and up won’t be afraid to cheer.

“I’m not a Superstar…I’m an ass-kicker…I am…Brock Lesnar.”  It’s the angle WWE has needed for years.  Brock Lesnar is back to bring legitimacy back to WWE, and it’s such a true statement on many levels.  Bring in a guy that MMA fans have seen compete in brutal battles over the past few years, and a guy whose cocky attitude caused controversy the entire time.  Bring in an anti-Cena, a guy who is the exact opposite of everything Cena does and says.  The Rock was great to face off with Cena the past year, but The Rock is similar in his approach to loving the fans and the business.   Brock Lesnar is a legitimate ass-kicking machine with the background to back it up….and makes sure we all know he doesn’t give a damn about anything else.

The Lesnar promo was along the lines of something you would see in a UFC hype video.  There was no WWE pride, no love for anything WWE-related, just the same smart-ass Brock Lesnar that sold so many UFC PPVs.  The only time Lesnar seems happy is when he’s making a smart-ass comment or talking about destroying someone, and it’s exactly what wrestling fans need.  For everyone that hasn’t been able to stand the Cena character all these years, the Brock Lesnar promo below gives you someone to cheer for…..the new face of WWE: