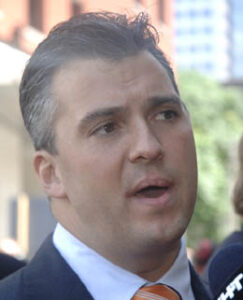 In what we feel is one of the biggest wrestling news stories in a few years, apparently Shane McMahon has resigned from WWE. Even though this is WWE we’re talking about, it seems legit.

The following press release is on WWE.com:

Shane stated, “It has been an incredible experience to help build WWE® into a global phenomenon. However, having been associated with this organization for the majority of my life, I feel this is the opportune time in my career to pursue outside ventures.”

“Even though I am personally saddened by Shane’s decision to leave the company, I am proud of the enormous contributions he has made. He will unquestionably bring passion, commitment and extensive business experience to any endeavor he pursues,” said Vince McMahon, WWE Chairman and CEO.

Now there is a statement from Shane McMahon himself, again from WWE.com:

“It is with great sadness that I announce my resignation from the WWE, effective January 1, 2010.

I have never even considered a future outside the walls of the WWE. However, sometimes life takes an unexpected turn and while it is the most difficult decision I have ever made, it is time for me to move on.

First and foremost, I would like to thank my father for the incredible education working with him has provided and for giving me the opportunity to play a role in building WWE into the global phenomenon that it is today. I am extremely proud to have been the 4th generation in this business, and I am grateful for everyday I was able to work along side not only my own, but the entire WWE family.

Thank you to all of the WWE Superstars both past and present for your passion, pride and dedication. You are truly the engine of the organization and it has been a pleasure to work with, learn from and get to know all of you. Thank you for the privilege of sharing the stage with you and for allowing me to become but a momentary member of your elite brotherhood. I have so much appreciation for the many sacrifices you endure, both physically and personally, to make this business the success that it is. The respect I have for each of you is immeasurable.

Finally, there are no words to express my gratitude to WWE fans the world over for supporting this company through good times and bad and for your unbridled passion that fuels the Superstars’ performances. I am profoundly grateful to have been able to entertain you both in front of the camera and from behind the scenes. You are the greatest fans in the world.

I will always love this business and will remain a fan forever.

A McMahon resigning from WWE? Of course, Linda did to run for Senate or whatever, but she hasn’t had near the impact over the years as Shane has. And over the years, many speculated that WWE would be exciting again if Shane ever took over. Now we’re doomed to think that Stephanie and Triple H will no doubt be handed the reigns of WWE someday….ugh. Is this a work? Would Shane ever entertain the thought of starting his own show or appearing on another? Probably not, but this big move definitely will start the “what if” scenarios. Let’s just hope it doesn’t mean Shane will be another guy who could really make wrestling great but does other projects instead that don’t involve wrestling like Paul Heyman and Eric Bischoff have.