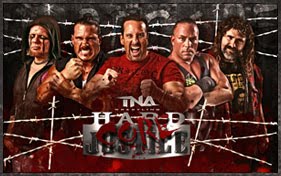 Things have been slow around here lately, and for good reason. The reason is wrestling is in a horribly boring state. Are the fans of the hot period of the late ’90s really watching the current WWE product? I don’t think so, I think the transition has been made to kids and their parents in the crowd wearing Rey Mysterio masks and John Cena shirts. It’s quite simple, how can someone who lived through the glory years of WWF, WCW, and ECW era enjoy any of the forced crap that’s on WWE TV these days.

This brings us to TNA, who had a run of decent interest with the buzz created by signing Hulk Hogan and Eric Bischoff.  The thought was Bischoff and Hogan would take TNA to the next level, but that really hasn’t happened.  Hogan and Bischoff are both awesome on-screen characters, and no doubt have experience working on the big stage in wrestling, but things just haven’t clicked although there have been some major improvements such as bringing RVD, Jeff Hardy, and Mr. Anderson on board.

After the recent period where WWE had about a 1 week run of good buzz surrounding the NXT angle before it went flat, it seemed like wrestling was in yet another boring period.  Then another buzz began, with Dixie Carter dropping hints about huge change coming to TNA.  Almost immediately rumors about Paul Heyman coming in and taking over began, and hope was once again alive that a watchable wrestling product for adult fans would be available.  Well Heyman’s deal is still being kept under wraps, and it’s not a guarantee he is coming in at all, but in the meantime TNA is hosting another farewell style PPV for ECW.  Many fans on the net are putting this idea down, saying it’s time to just let ECW die.  I would agree if not for the fact that all of these ECW shows generate more emotion, excitement, and interest than ANYthing anyone else has done in years.  Seeing talent we don’t see on an EVERY SINGLE WEEK basis.  Seeing the diverse characters that simply aren’t there in wrestling anymore, and revisiting feuds and matches like Jerry Lynn vs. RVD and Tommy Dreamer vs. Raven, which haven’t been done in years.

The ECW PPV may be something that has been done in a similar fashion in the past, but until people stop going bananas and chanting ECW with that pure raw ECW emotion, and until the Internet stops lighting up with fans hunting for more news and info on this “EV2.0” angle as that’s the name TNA will be using for the group, I say its a great idea that will do well.  Hopefully it is something that will be a cool show to hold us over until TNA does the right thing, and pays Paul Heyman to come in and give him the chance to do what he does best….innovate and create a fresh new wrestling product like NO one else can.